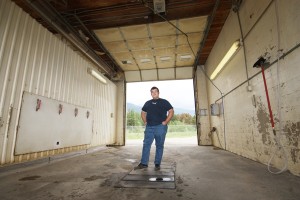 Twenty feet long, eight feet wide and eight feet high. And there will be 20 of them. Last week the village of Valemount gave the full go ahead to the mini storage on 5th Avenue.

It is operated by Robert Van Haaften, the new owner of the car wash which is next to the container site. The former Edmonton resident bought the car wash in May and the land next to it was part of the deal.

“I pay extra dollars for that land anyway, so I just needed to find a way of making it viable,” Van Haaften says.

When he talked to people in town a lot of them said their big concern was there was no place to store stuff. They said if sledders have a place to store their snowmobiles then they would have extra incentive to come to the area.

Van Haaften says the storage will also help people who are moving in and out of Valemount and seasonal workers who tend to come back for the summer. Within the first month of developing the idea he has already had about 20 people who have inquired.

The 25-year-old originally from Edmonton was travelling through British Columbia for three months before coming to Valemount looking for a place to live and a business to buy. His preference was a car wash. When he was a kid, he used to help his dad in a body shop and since then has been passionate about cars.

“When I would take my friends for a ride in my hot rod, I would always ask them to take off their shoes and put them in a box before getting in,” he says and laughs.

Out of the all the towns Van Haaften visited, he says that Valemount seemed to have the most potential and he hopes to work with other small businesses to boost the local economy.