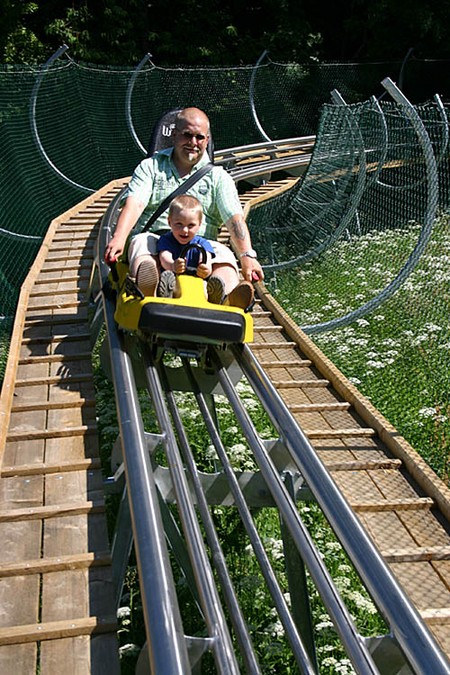 It has been tremendously successful in Europe, the United States and Quebec, and now local resident Herbert Boenisch sees an opportunity to bring an alpine coaster to Valemount.

It could be the first alpine coaster in Western Canada. Boenisch envisions it somewhere around the TV antennas on Five Mile Hill with some 400 metres of elevation.

“This one is on tracks. It is very safe, there are no accidents.Not too many problems with insurance andliability.”

Boenisch and his wife Kerstin have lived in the Robson Valley on and off since 2004 when they built their house, but they now permanently reside here as of last year.

“I started to think: what is possible in Valemount? I decided that I would like to build an experience and adventure park. It would not only be the alpine coaster.”

Last week, Boenisch presented his proposal to the Chamber of Commerce and to a select group of local government and business individuals to ask for feedback on the project. Boenisch says several people he has told have indicated that Five Mile Hill would be a good place for this development.

In Quebec, the ski resort Mont Saint Sauveur installed an alpine coaster which was operational in 2010. It was highly successful as Canada’s first. Blue Mountain, Ontario’s largest ski resort, is currently constructing their own coaster. Boenisch says that he has ridden on such coasters both in the United Sates and in Germany. He says there are more than 400 of these coasters from various companies in his home country of Germany, where he worked as a youth retreat manager and youth worker for the German Scout Association.

German coasters are typically one kilometre in length over an elevation drop of 300-400 metres, he says. Part of his rationale for pitching the development
is that the village does not have a unique attraction that you cannot find in any other mountain tourism town.

“My idea connects a unique attraction and a more attractive infrastructure for the tourism sector in the village and valley,” he says. “I want it as environmentally friendly as possible. Not a lot of concrete.”

According to Boenisch, only the alpine coaster is expensive. The rest of his proposed family fun park could be built incrementally at much lower costs. He says the
coaster would bring three to four full-time jobs for Valemount and the construction would employ 10 workers for one year.

“I hope to make something that would put Valemount into this itinerary perhaps for one day as well. Europeans rarely stay longer than three days in one place.”

He adds that it would be nice if the park was visible from the information centre or the highway. Since in his own experience, tourists have a hard time finding local
attractions due to lack of directions and signage.

“Currently at the visitor information centre they will point out the McKirdy hike. This is unbelievably beautiful, but for most tourists, it would be a full day trip,” he
says.

Boenisch adds that other business opportunities may arise from such a facility.

“In Germany they make the same money from the adjacent Beer Garden as they do from the coaster,” he says and laughs.

He would also like to create more circuit trails and improve the biking trails as well. There would also be interpretive sign trails explaining the local forests and environment. He says the next step would be stylish tea house on the top of Five Mile, similar to that at Lake Agnes near Lake Louise. It would also be the launch point to hike into McKirdy Meadows.

“We could have a lower tea house and an upper tea house. Hikers would be able to decide how far they want to hike in that day.”

The idea would be to not grow into the McKirdy meadows.He says perhaps it would need a better trail, but developmentwould take place on Five Mile itself. He saysthe tea house would have to be built in a certain style toattract patrons.

“A really stylish building, more like an alpine lounge, powered by solar, low impact. High quality in food and entertainment. Music on the mountains during the summer.
In the winter time, torch runs with sleds from this point down. This is what I envision for the future.”

He points out that the Five Mile Road could also become one of the longest toboggan runs in Canada.

“The hill side should be a quiet and sustainable development for Valemount. The Westridge can be the motorized part. This hillside would be for hiking and biking etc.”

Using data from a feasibility study from 1998, he says he would need about five per cent of highway users to access the site for it to be profitable. This is based on each user only taking one ride. Most operators say that on average most users make two to three runs.

The sled can only go 40km/hr and can not come off the track, but each sled does have brakes. It usually takes a few runs before most users are comfortable going full
speed. Based on each user taking two runs, the feasibility of the coaster becomes very promising. Based on $5 per run, this would break even. In Quebec, they charge
$9.99 per person. At this price, the coaster is definitely profitable, he says. This does not include potential revenue from refreshments and food sales for parents who
let their kids make several runs.

Boenisch adds that currently all alpine coasters in Canada are part of ski hills and have been built to improve summer use of the resort. Even seniors are using it in
Quebec.

“It is not only a family ride for kids.”

Video clips of alpine coasters are readily available on Youtube.