Once upon a time there were two classes, they were going on a school field trip. Each class was from different schools. They were going to the Great Mountain. A couple hours later they arrived at their destination.

The teachers needed an alone time from the long bus ride so they sent the kids out to play but said to stay close by. All the kids ran off………………….. and this is when the real story begins to happen.

You and your classmates are making up a game and the other class wants to join in. So the two classes start making the game up. A couple minutes of planning and you know what to do.

So one class which will be yours will go hide somewhere and the other class has to track you down and if they find everyone they play again. This is a good way to explore the area because you’ve never been here before.

When the first class is counting to one minute you run trying to find a hiding spot. A minute later they yell so you quickly jump into the tall grass, but it wasn’t tall it was just brown and like a cave. And your friend comes to join you.

The class is running towards you and you get up and run fast. But they’re faster and catching up quickly, then you see a trail to your left and you take it. It was straight for a while and then it went winding up and up!  The trail goes up the mountain and keeps going higher and higher and turns up in circles. And at the top there’s an unlocked chest. You open it up and inside is a wand. 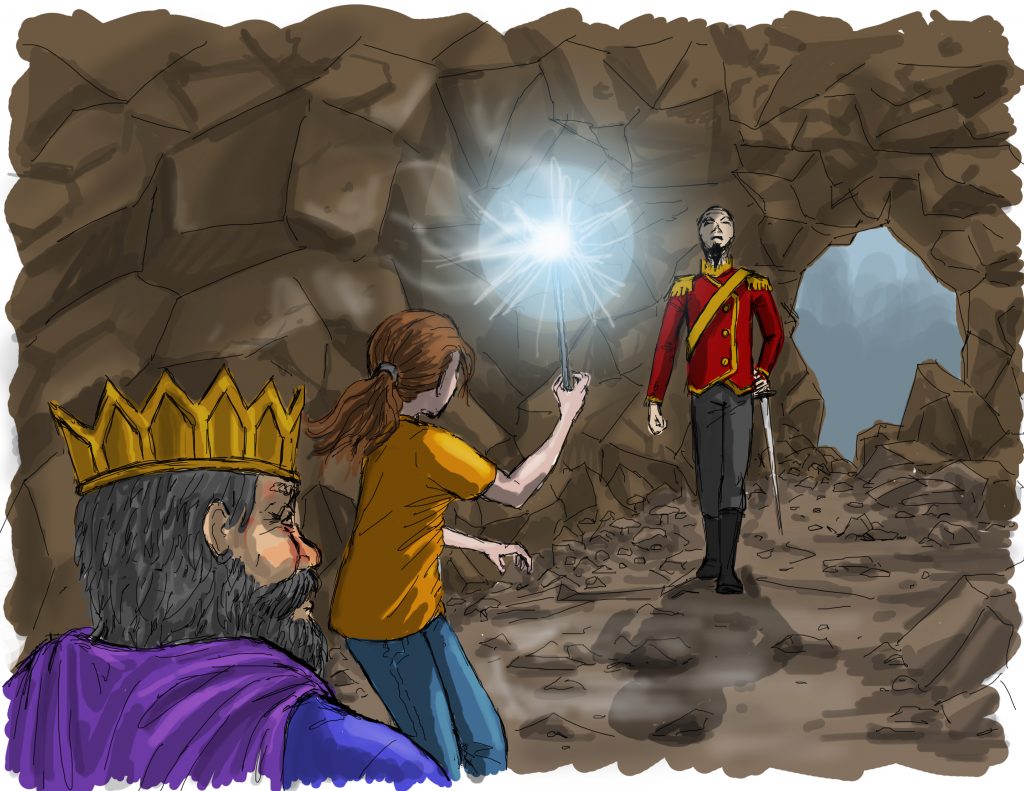 You know the first time you said that something was chasing you, well there is this weird guy his name was King Foo and he had a lot of power, just about all the power in the world and he wanted to destroy the planet and specifically this city. But you have power too from the magic wand! So you fly off the mountain into this weird mysterious cave but King Foo can see through anything and you know he can also freeze you like a statue so before he walks in the cave you freeze yourself and trick him and he goes away!! King Foo of course has a side kick named Sidekick so he stands beside you guarding you but when he looks away you unfreeze yourself and run away! As your running King Foo uses his mind control power and throws you in a dark black hole, then he throws a big house and tries to smash you but you climb up the house and get out of the hole.

You fly up to the mountain and see if your friend is ok and she is fake frozen so you tell her to go somewhere safe so King Foo cannot find your friend. You go back down to King Foo and he traps you in another hole, this hole was narrow and small so its hard to climb up but you are strong and do it.

Your thinking of what King Foo’s weakness could be, you look around and see that he’s angry and doesn’t have family, love and wisdom so you go talk to him and he says he doesn’t want to hurt anything or anyone, he’s been forced to help his brother Prince Moon. Prince Moon said if King Foo doesn’t help him he will kill King Foo. And then he will get his way,

As you are talking to King Foo you see something in the corner of you eye,  you look to your left and there’s nothing there. You look to your right and nothing is there either. So you turn right around and it is Prince Moon. You ask “what are you doing here Prince Moon you don’t belong here!” He replies “I came to take over the world with my brother King Foo!” King foo is standing by you worried what his brother will do to the world. So King Foo steps up to him and tells Prince Moon, “I will not help you any longer, I am the King and I declare you will go to the very bottom of the hidden dungeon in the basement!!” Prince Moon now is stronger and has more power then anyone in the world. Well he thinks he is stronger but he is not smarter. 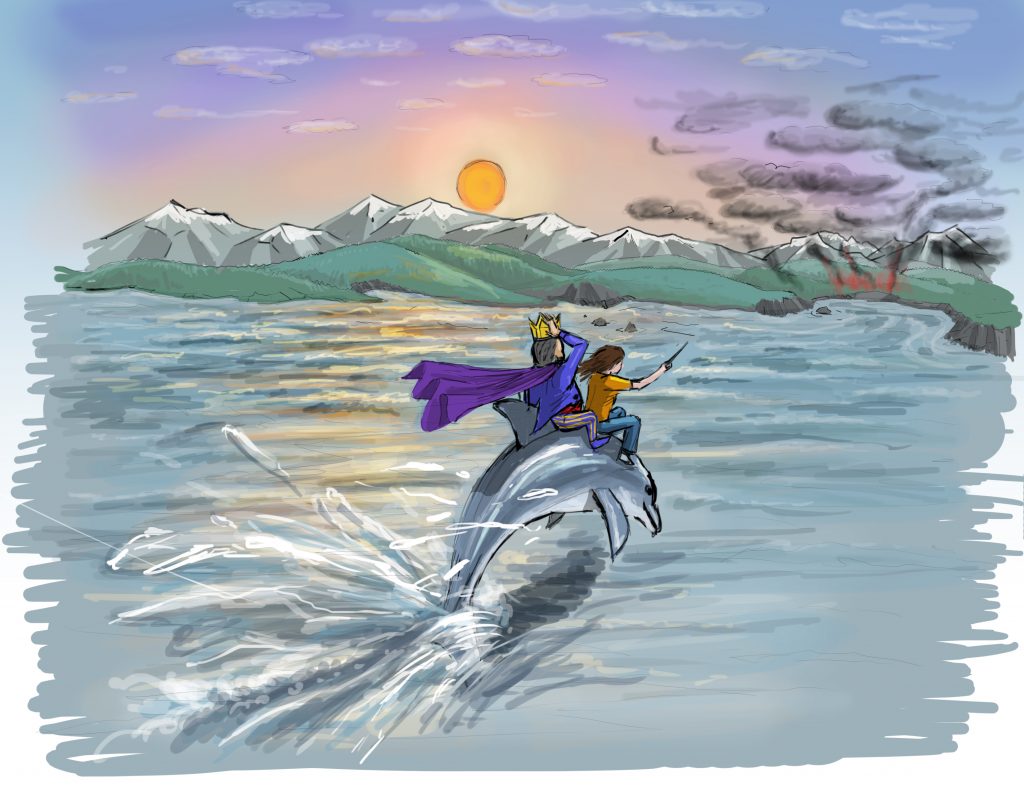 As you think of something to do you get an idea!!! You realize if you can put King Foo’s power and your power together you might be able to defeat Prince Moon. So you tell King Foo your idea and you put both powers together and try but Prince Moon is too strong! He puts his powers against you and King Foo and he blasts both of you into the ocean, that’s right an ocean!

Your panicking not knowing what to do and then you hear something its like a squeak and you turn around and there is a dolphin, then you see something else it comes closer and its a beautiful mermaid, she asks you if you need help and King Foo said yes! So the dolphin gives King Foo and you a ride back to the shore. When you look up you see your friend hiding behind a big rock on the beach and you tell him its safe to come on out. The mermaid asks if you need anything else and you say that it would be good to have a bit more power. But you can’t hold any more in your body so you ask King Foo  if he can hold more power and he said no but he had an idea…”what if your friend who is still hiding behind the rock can hold the power?” asked King Foo. “Thats genius!” you say “ is your friend up to it?” asked King Foo. Duh! Of course he is! Your friend steps on top of the rock and raises his hand up and says i can do it! So the mermaid gives your friend the powers and she swims away. Now its time to to go kick Prince Moon’s butt! “Let’s go!” you say loudly. 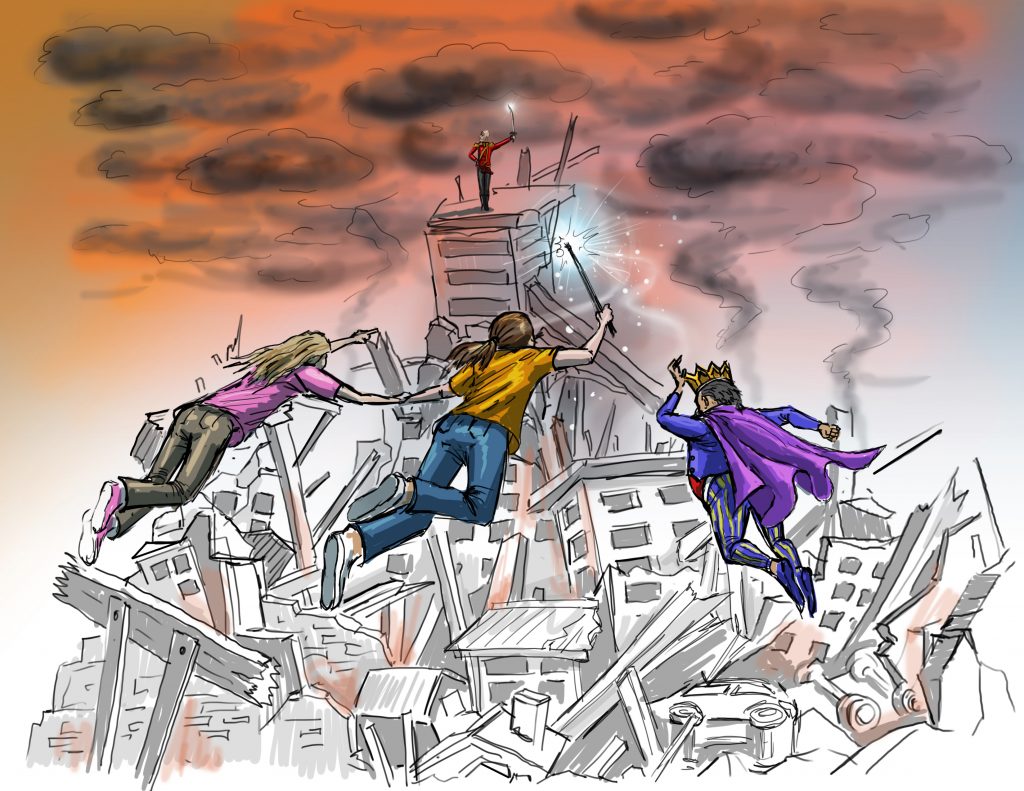 When you get to the place the Prince is at you see a lot of damage done to the city already there are buildings smashed and cars squished and Prince Moon is standing on top of a tall building. So you fly up there with your friend and King Foo. Prince Moon turns around and is in shock that you are back, so while he is in shock King Foo blasts his power and you blast your power and your friend….? Oh wait a minute your friend isn’t there! He’s hiding behind a another rock! You yell and tell him to get over here, we are getting him good and need his help! Prince Moon is almost defeated so your friend comes over and blasts his power and BOOM Prince Moon shot up to space and he was gone forever!! Suddenly the clouds clear up and the city magically goes back to normal and when the warm sun comes out all of your classmates and the other kids melt from being frozen.