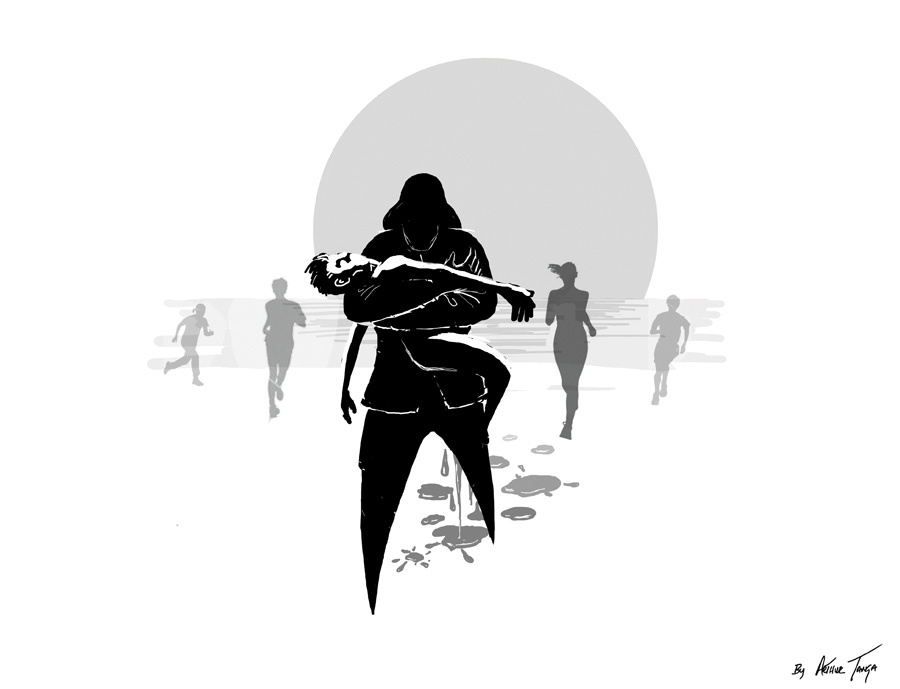 Goofing around in the water is an adventure for every kid in the summertime. Jumping. Daring. Splashing. Flirting. Maybe a bonfire. Maybe skinny dipping. Maybe a rope swing.

Shouting and laughing, kids burst out of the confines of school and shed their winter layers. They romp without a care in the world, making the most of those fleeting years between the close guard of parental restrictions and the heavy weight of adult responsibilities.

But not every afternoon goes well.

Dennis was a volunteer with Search and Rescue. He told me about his once-in-a-lifetime experience.

As he relayed the sequence of events of one specific afternoon, I could see on his face, like a movie screen, the emotions as his story unfolded.

“I had first aid training,” he prefaced his tale. I braced myself for trouble.

“It was a glorious day. The kids had a favourite place where the current of this creek was strong. The water was cold. The noise of their voices reached the nearby houses. But rope and rushing water is never a good combination.”

I shuddered, almost stopping his narration. This gorgeous day, this group of eager kids, this sunny afternoon would not be remembered as a mountain top experience.

“One of the kids got his leg wrapped in the rope. When the others realized, they shouted and yelled. Some ran for help. One got to the nearest house. The neighbour brought a knife, dove in and released the kid, bringing the unconscious body to shore. Then there was silence. No one knew what to do. Another kid got to a telephone to call the ambulance. My son ran home. He knew I could get there quicker than the ambulance crew.”

Maybe this story has a happy ending? I leaned forward to listen. My eyes intent on his face as Dennis’ memories surfaced.

“I started CPR. Chest compressions. Mouth-to-mouth. My two hands were all there was in the whole world. My hands and the kid’s face. Someone else took a turn, but I could see that they had little experience. I kept going. I learned later how many minutes. I felt no strain, no pain. Only my two hands, doing what they were trained to do.”

I filled in the scene with my imagination.

Who ran? Who brought the knife? Who did not hesitate to dive deep? Hands pulled with hope. The bystanders’ empty hands, clenched. The ambulance crew, careful, hurried, hands carrying gear, each with specific tasks. The police, hands protecting. The parents arriving, hands tightly gripping each other.

“The ambulance took the kid, they used the bag and mask and continued CPR. Later I learned that in the medical centre, one jolt with the paddles brought back a pulse. I was ecstatic! My two hands, and many other hands had saved the kid from drowning. I felt like I was on top of the world!”

I sat back. I breathed a long sigh. What a happy ending!

But it was not over yet.

“He was in the water too long. Later, he was not able to breathe without equipment. It hit hard when news came that he didn’t make it.” There was a long pause. Then Dennis spoke quietly. “There were obviously things there that were well beyond my control.”

Some of the First Aid crew that attended that day needed counselling to address the trauma they experienced. I could see that Dennis still struggled with turmoil: did he get there fast enough? do enough? try hard enough?

I asked Kevin, another SAR volunteer for over 30 years, about his experience attending scenarios involving death.

“Unseen hands,” he told me. “I don’t allow ‘what if’ to enter my mind. If my hands aren’t enough, then I believe that unseen hands continue to take care of the person. He may leave this world, but is cared for in the next.”

Eleanor Deckert writes in Avola. She has had a life-long interest in the myriad expressions of the spiritual journey. She writes a monthly column, and shares weekly quotes with readers.