Doug and Christine Monroe care deeply about the valley and want to see it thrive. 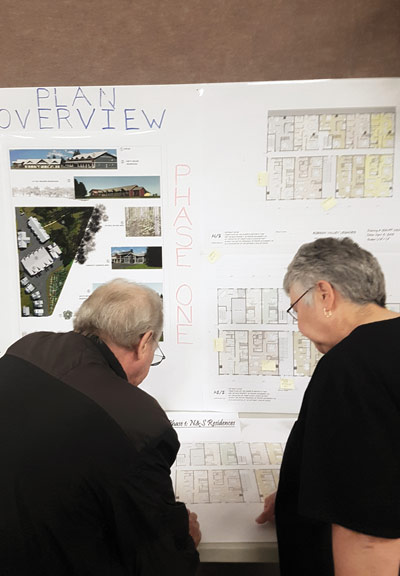 They have seen many old timers move to larger cities, away from family, to live in facilities that meet their needs. The pair, along with Dale Stephens, have a plan to help keep residents 55 and over in the community. They want to help the elderly age-in-place by bridging the gap between independent living and long term care while creating local jobs in the health care sector.

Monroe and Stephens presented an overview of the plan to a gathering of about 90 on Wednesday May 15th. After people mingled over diagrams, floor plans and goodies, the pair presented a powerpoint explaining the plan.

The proponents say this is not a “low income” housing solution, but on par with existing rental units and below the provincial average. He said the units will only be available as rentals to start because creating a strata is time-consuming and costly.

The development could potentially ease pressure on the McBride and District Hospital, by providing an option for those not requiring 24 hour medical care.

Phase 1 would use the existing building on the old high school property. The Monroes own the land, and are beginning the rezoning application process, so that multiple residences can be constructed on the lots. The existing building would be upgraded to incorporate 18 suites over two levels. The proposal includes office space, laundry facilities for staff and housekeeping services. Green space, gardens, and a picnic site are planned for the south-east boundary of the property.

Phase 2 would include another building with five independent living suites. Also in the plan is an addition to the existing building that would house the common spaces; pool, micro-theatre/lounge, kitchen and dining area. A common question asked is “Who gets to use the pool?” The main focus of the facility is the residents and their guests. During the presentation, attendees were excited to hear that other groups will have the opportunity to book the pool with a user fee. He specifically mentioned the pool being available for school use.

The remaining two stages would see the construction of a duplex as well as six self-contained mini-homes. The duplex plan shows a one level structure with more space and accessibility. The mini-homes could serve as independent living quarters or as worker accommodations. Each unit would have a small covered patio that can be used for some storage. 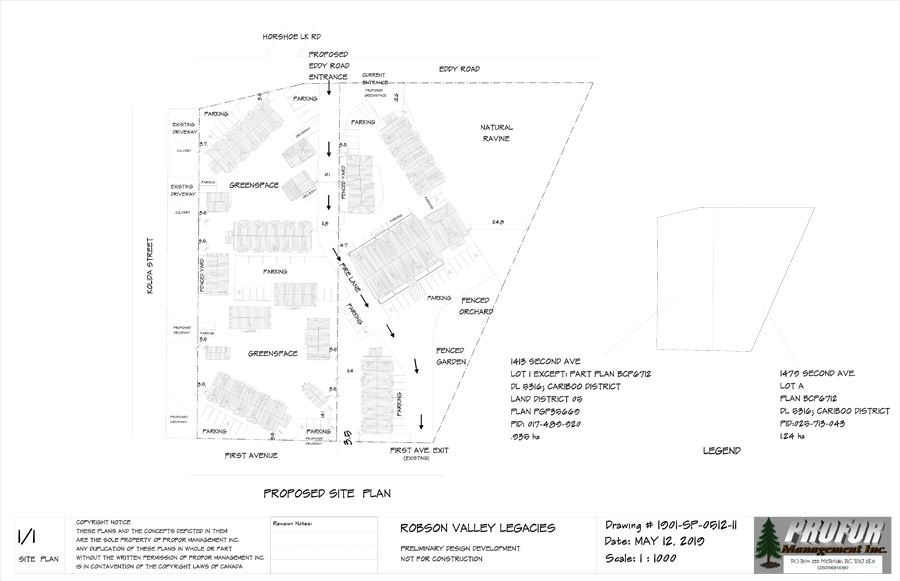 The plan has already received attention and support from MLA Shirley Bond who has previewed the plans.

“One of the issues that I hear about most frequently in McBride and the Robson Valley Region is the need for a range of housing options including for seniors,” said Bond. “I have had a briefing and conversations about the proposed project and was very impressed with the initial work that has been done.”

The Monroe’s will finance phase one, privately, although there is the possibility of using grants, incentives and rebates to allow more expensive amenities such as an elevator in Phase 1.

“This is a fantastic idea,” said Regional District of Fraser Fort George Manager Dannielle Alan. “This would build a community for seniors allowing for services to come to them in a streamlined and cost effective method.”

Pete Amyoony thinks that this is just what the valley needs. “The presentation was amazing,” he said. “All the work makes sense.”

Amyoony asked during the open question period if someone willing to work as a groundskeeper (or any other onsite jobs) could be considered for a reduction in rent. Monroe said they would be open to discussion.

People from Valemount attended as well. Valemount Councillor Donnie MacLean said she is glad to see locals stepping up to the plate.

Kevin Chiupka, who is a few years away from qualifying for a residence, thinks it’s an idea long overdue, and is eager to see it succeed.

“Let’s get the shovels in the ground,” he said.

As the evening came to a close, Monroe and Stephens were pleased with the outcome.

“We want a lot of really positive feedback,” said Stephens. “This is what we want. We want to see other people’s vision.”