“The best word that I can use to describe it is probably fulfilling… inspiring,” said McBride high school student Saeda Rose. “It’s hard to talk about the experience to anyone who hasn’t been on it. It was a profound experience.”

It was not her first trip to Mexico, or even to an area deeply affected by poverty, but according to Saeda, this trip was different.

“I had been in those communities before, but I didn’t really see what it actually was,” she said. “I never spent that much time with people actually living that life.”

She said it was her father that would do the talking on those trips, and they would breeze through those neighborhoods.

“To spend time with the actual people that live much harder lives than we do, it was inspiring because they are also so much happier than anyone I see in Canada,” she said.

“In Canada, rich or poor, people aren’t as authentic, gracious or as grateful. There, everyone works so hard 24-7 to put any food on the table. They work harder than anyone I know in Canada and just can’t get ahead.”

Vicente Guerrero, is not a rich community, said Saeda, but not everyone in the community is living in total poverty either.

“The roads were terrible, there were huge craters in the road and stray dogs everywhere,” she said.

“Everyone has a fence, but the fence is just slabs of cardboard and wire. You’d see a lot of little tiny square houses, a few slabs of wood or metal stood up. Very tiny, messy yards, and garbage all over the streets.”

“To see a nice house is usually a shock.” 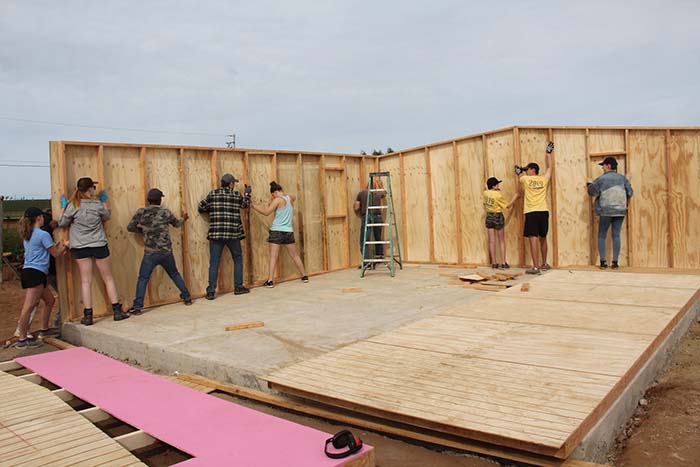 Saeda did experience some hardship on her journey.

“The worst part of the trip was getting there,” said Saeda.

The group was on the bus for 40 hours, stopping for the night once, and driving straight through the other night.

“That was the worst part and everything else was amazing,” she said.

Saeda said they were kept safe but not cloistered, and were far outside their comfort zones.

“We stayed right in the neighbourhood. There are stray dogs everywhere. We were building with tools. There were a lot of factors to consider and a lot of kids there without their parents, but there was nothing to be nervous about,” she said.  “The organizers were really awesome people and super helpful and passionate about the work.”

The trip and construction work is organized through a group called Live Different that sends volunteers to build houses for families in need to a number of countries.

Saeda was pleased with the progress they made in a short time.

“We only spent four days building, which is amazing. Altogether there were 40 people and we built two full sized homes and one smaller house in four days,” she said.

However, the emphasis was on more than the homes.

Saeda said organizers put the emphasis on the experience.

“They said that the house will get built and that is secondary. Go talk to the family, go play with the kids.”

Saeda did, despite not speaking much Spanish

“It is crazy how the language barrier melts away. The kids were so eager to get to know you. They just kept trying and eventually found a way to get their point across.”

Saeda said that she knew she wanted to do something bigger than herself, but the trip helped her put that intention into action.

“I have to have this incorporated in my life, because I think I would feel discontent if I wasn’t doing something like this.”

Saeda is hoping to make change in her own way.

“I feel more called to help the environment than people with my life,” said Saeda. “We have to save the actual planet before we can save the people. Without the planet there are no people.”