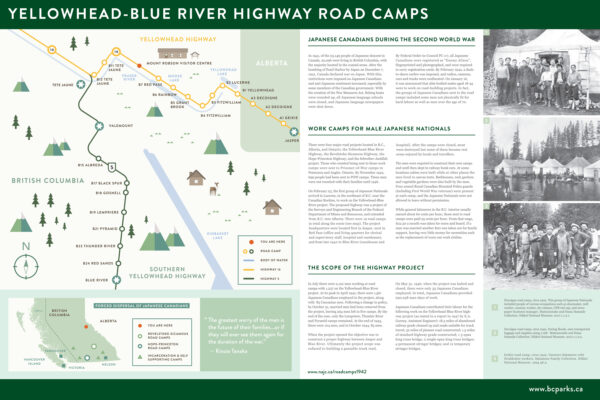 On December 7th 1941, Japan bombed Pearl Harbour, setting into motion the divisive policies that led to the expulsion of “Japanese Nationals” from B.C.’s coast.

The majority of men of military-service age, 18-45, were forced to leave their families and assigned to road camps in the B.C. Interior, including in a stretch of 200 km between Blue River and Jasper.

On June 23rd, a new sign was unveiled to the east of the Mt. Robson Visitor Centre parking lot showcasing information about the camps and that time in history.

Lisa Uyeda, Heritage Committee Chair at the National Association of Japanese Canadians, spoke about her great-grandfather Uyeda who was interned in one of the camps north of Blue River and separated from his family.

“During the forced uprooting and dispossession of Japanese Canadians in the 1940s, his family was torn apart. My great-grandfather, came way out here.”

Her grandfather, meanwhile, was sent to the Lemon Creek internment camp, and her great-uncle Tak, went to Griffin Lake road camp.

Uyeda noted that an existing interpretive sign was installed at Lucerne in 1995 but was now weathered. They also leaped at the opportunity to install a sign in a more prominent location and had support from BC Parks and several other organizations.

Prince George-Valemount MLA Shirley Bond spoke at the ceremony and was visibly moved.

“I am a very proud Canadian and a very proud British Columbian. And it’s almost hard to imagine that in our country and in our province, there was legislation and legislators who believed it was necessary to separate families and to intern Japanese Canadians,” she said. “I think that events and monuments like this are all about reminding us that it shouldn’t happen again.”

She said she will bring her grandsons to this site to make sure they understand what happened.

At their peak, the 19 Blue River-Jasper camps accommodated 1561 men who toiled on roads with only hand tools for little pay. The first men arrived in February 1942 and spent several months building their camps and waiting for the ground to thaw before they could start work. A large number of those interned were actually Canadian-born. Some didn’t speak Japanese.

“If you had just one drop of Japanese ancestry, then they would want to take you out of that zone and put you in a camp,” said Leanne Riding, who grew up in Valemount and is now researching the camps. “Young, old, didn’t matter. Orphans with no parents, they would take the orphans and put them in orphanages in camps, in the U.S.”

The exclusion zone spanned from California to Alaska. Even after the war ended, Japanese-Canadians were not allowed to the return to the coast until 1949. Their possessions and homes had been seized and despite promises to return them to the Japanese-Canadian residents, the government had sold them instead to help pay for the internment camps.

Art Matsui’s grandfather Kanekichi Kosaka is pictured on the new interpretive sign. He was interned at Decoigne Camp on the Alberta side of the provincial border. Matsui’s mother and father were also interned but further south and not in road camps.

Kosaka was later send to a Prisoner of War camp near Schreiber, Ontario, as were many internees who refused to fully cooperate in the road camps.

Matsui’s mother was 12 when the war broke out and she didn’t see her father for four years. When they were finally reunited, her father didn’t recognize her.

Matsui was present at the ceremony, but believes it will take more than signs to prevent this kind of thing from happening again.

“They say they put this up so it won’t happen again but it is happening again. Canada has a poor history of separating kids from families,” he said, noting the hardships suffered by indigenous children and immigrant children.

Matsui lives in Calgary and said he and his brother are often mistaken as indigenous.

“The treatment of natives in Western Canada is poor. We know what it’s like to be treated as a native.”

He said he is willing to speak out on inequality and injustice.

“I’m always willing to speak out so it doesn’t happen again.”

This past year, the Goat’s Laura Keil interviewed the last known survivor of one of the Tete Jaune internment camps. Stay tuned for his remarkable story in an upcoming issue of the Goat.