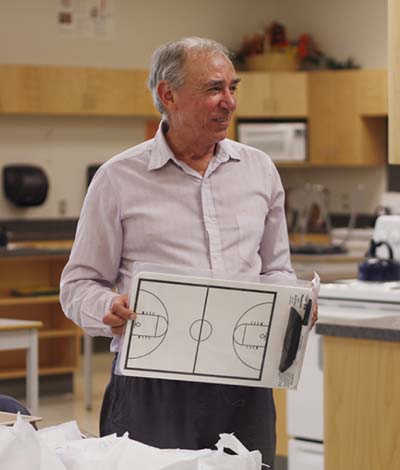 The Therese Casgrain Lifelong Achievement Award is given to one Canadian each year. Nusse was selected from 77 nominees across the country.

For 23 years, Nusse coached all levels of girls basketball at Valemount Secondary School as a volunteer. He started the girls team in the mid-1990s. The athletic director at the time asked why he didn’t put his efforts into the existing boys team instead. But Nusse persevered. He not only attracted a huge proportion of girls to play, he also inspired schools in other small northern communities to start teams.

Former players say he used the basketball program to teach self-confidence and build character. He gave individualized feedback to players and tried to bring out their strengths.

“Some of my teammates had different learning styles than the majority, but he considered them in all of his practice plans or game strategies, making sure no one was left behind,” says Shae-Lynn Carlson who played basketball for five years at Valemount Secondary and was a team captain. Her team, as well as the junior team, nominated Nusse for the award last year.

In addition to his volunteering countless hours for practices and out-of-town weekend tournaments, he put his carpentry business on hold during the basketball season. Nusse even financially helped kids that did not have the means to play.

Carlson says Nusse believed in them.

“There were countless times he expressed his support and enthusiasm for what we were capable of, consistently building us up and showing us our potential,” Carlson says.

“I probably wouldn’t be the person I am today if it weren’t for him,” says Taylor Clark-Felton, a player who graduated last year and is now helping coach the junior girls team. “He pushed me to do things that I probably would not be able to do on my own.”

Clark-Felton plans to continue basketball at college. She travelled to Germany for a basketball camp and says through basketball she has gotten more comfortable being in a leadership role.

When Carlson and Clark-Felton were in Grade 8, there were only six players on their team, but despite that, they played almost every weekend, and challenged teams from schools 10 times their size. Nusse drilled into the girls that being small doesn’t mean you’ll lose and that hard work beats talent when talent doesn’t work hard.

They finished 2nd place in the district that year, against PGSS (one of the larger schools in Prince George). During their Grade 12 year last spring, they finished 10th in the province. There are roughly 85 single A schools in B.C., Nusse estimates, many of which are larger than Valemount.

Nusse himself speaks about the gift of the basketball program being more than basketball skills:

“We won games and went to provincials and we were competitive and all those things, and they learned to believe in themselves and success on the basketball court led to success in the classroom … but really it was about a place to find self-esteem and build on it.”

When girls approached Nusse to coach them that first year two decades ago, they were up against many challenges. The high school gymnasium, for instance, was only half-size. They couldn’t host home tournaments or practice on a full-size court.

As a member of the high school’s Parent Advisory Council, Nusse lobbied and fundraised for a new high school with a full-size gym and community theatre.

In 2006, the new high school was built with the sought-after theatre and gym and local teams can now host tournaments.

Prince George-Valemount MLA Shirley Bond remembers Nusse’s passion for improving the high school when she was on the school board.

“Tim was a hard working member of the PAC and at that time very concerned about athletics and young people being able to have a proper size gymnasium,” she says. “I remember thinking the community was punching above their weight – they did such a good job fundraising.”

She notes he was always respectful in his discussions with her.

“He has very strong opinions, but he loves his community.”

Nusse plans to donate the $10,000 prize to the BC Special Olympics (the prize is a donation to a charity of his choice). He first got to know special olympics athletes at Prince George track meets. He says many special olympics athletes inspired him over the years with their positive attitude, sportsmanship, commitment and working to do their personal best. With the donation, he made a request that some money be put aside to support rural athletes who, as Nusse well knows, travel thousands of kilometres to reach competitions.

“I was overwhelmed when I received the call from Ottawa,” Nusse says of the award. “My first reaction was, ‘Why me? There are others so much more deserving.’ When I was asked to designate the not-for-profit society, I had no hesitation. I had received so much over the years from the individuals … why would I not use this opportunity to give back to them?”