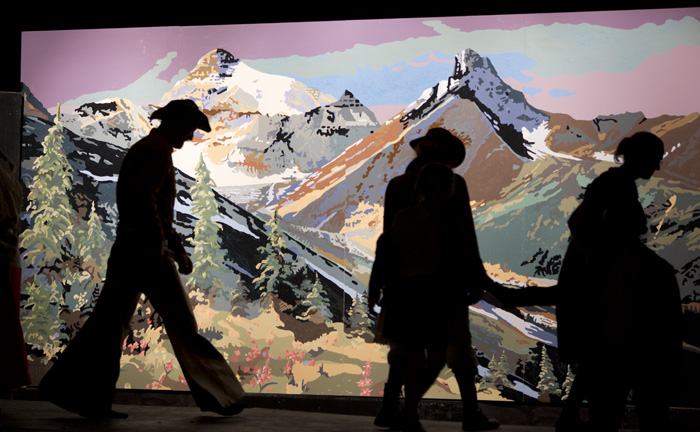 Clopping hooves. Smell of harness leather. A freezing river crossing and rich mountain colours. With a few well-placed props and sound effects, local playwright Sharon Stearns viscerally transports her audience to the untracked land of the Canadian Rockies a century ago through five unforgettable characters in Hunter of Peace.

The play is inspired by the real-life adventures of explorer and botanist Mary Schaffer Warren, an American widow who led a dangerous expedition in search of the headwaters of the Athabasca River in 1907. She overcame limited expectations of women at the time to become one of the premiere explorers in the Banff-Jasper region.

Stearns wrote the play in the 90s and other theatre outfits have performed it over the years. Over the past two weeks, the Robson Valley’s Wishbone Theatre Collective performed it in McBride, Valemount and Dunster.

This historical drama is a change from Stearns’ usual lighthearted cabarets, but one warmly received by audience members.

The play is a fictionalized account of the expedition, but the characters are based on real people from the era. In the play, a recently widowed Warren and her friend Mollie Adams enlist two guides, Bill Peyto and Billy Warren, to help them reach the Athabasca headwaters. An elderly butterfly hunter tags along. Chock with sexual tension, comedy and romance, the play takes a darker turn as the narrator – the elderly Warren recounting the tale – foreshadows the death of Mollie. The foreshadowing keeps the audience engaged and in suspense.

If watching theatre is an exercise is collective catharsis, then the audience was properly dosed with both comedy and grief.

The romance between Peyto and Mollie, a struggle between two egos, shores up as heartbreak when Peyto finding Mollie broken on the rocks and Peyto wonders if she’s alive – “she smiled at me… she turned and smiled at me.” His monologue distills the obvious horror – the way her legs are at a funny angle, her body cold. The spotlight on Peyto with his single rope, mumbling, desperate, was powerful. The following scene of him carrying her body back to camp is one of pure pathos, especially with the accompanying music, and, despite earlier comedy and slapstick, it avoids sentimentality.

Seth Macdonald’s performance as Peyto was brilliant – it was easy to believe I was watching an irascible hard-to-love frontier man full of insults and one-liners.

All the actors brought talent to the stage: Dustin Winzer as the hilariously coy Billy, Bridget Uhl as the giggle-inducing Mrs. Juliet de la Beach Nichol, Miwa Hiroe as the grounded yet spiritually free Mollie, Shara Gustafson as the self-actualizing Mary Schaffer Warren; Sharon Stearns as the whimsically nostalgic old Mary, and Isis Hiroe as Warren’s earnest niece Isobel who vows to write it all down someday.

The backdrop was a luminescent tableau of the Athabasca Headwaters 8x16ft over four plywood panels, painted principally by McBride’s Sheilagh Foster (with help from others) and it is a work of art in itself.

With only a few exceptions, changes of scene were smooth, and the actors made good use of the entire stage. The play involved much more than actors merely memorizing lines – behind the scenes contributors included Wishbone Theatre veterans Harold Edwards (Production Manager) and Bob Thompson (Stage Manager). Zach Schneider delivered as the Sound/Light Tech. All contributed to the success of a great show.