Kinder Morgan has re-affirmed its commitment to hiring local people and boosting the local economy during the Trans Mountain Expansion.

Last week, Kinder Morgan hosted an open house at the Best Western to give locals an idea of what the temporary work camp — called a “sleeper camp” — would look like.

Local accommodation such as hotels, RV parks and rentals will be used to house the remainder.

Kinder Morgan says the camp will include beds, laundry facilities, recreation, as well as health and medical services, which means Kinder Morgan employees will use local amenities for things like groceries, restaurants and bars, etc. 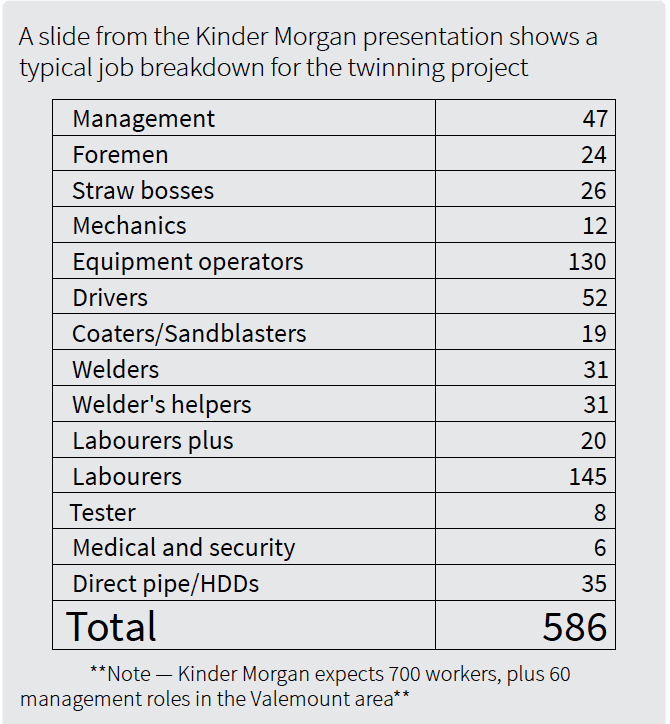 And for any locals wondering about unruly pipeline workers, Kinder Morgan says a worker code of conduct is being developed.

A Kinder Morgan spokesperson said, “This is a good pipeline job, and people don’t want to lose it. Generally our employees abide by the code of conduct.”

Though hiring is done by outside contractors through the Kinder Morgan database, Kinder Morgan said hiring a certain percentage of local and Aboriginal people is a priority.

There will be a total of “800,000 person-years” of employment during construction and 20 years of operation of the Trans Mountain Expansion, according to Kinder Morgan. At its peak, the project’s workforce is expected to employ 15,000 people.

The capital cost for the project is estimated to be $6.8-billion dollars, and upon completion, will triple the capacity of the current 1,150-kilometre pipeline from 300,000 barrels per day to 890,000 barrels per day, and will add roughly an additional 980-kilometers of pipeline.

Project-related sub-contracts are estimated at $4.5-billion, according to Kinder Morgan, coming in the form of contracting services, professional services, materials and equipment, and support services.

Though Trans Mountain will employ 700 workers plus 60 construction management staff in Valemount, the Trans Mountain sleeper camp in Valemount is estimated to hold 350 people. Local accommodation such as hotels, RV parks and rentals will be used to house the remainder.

A berth is a specific location in a port or harbour used for mooring ships when they are not out on the ocean.

Upon completion of the expansion, Kinder Morgan says tanker traffic along the coast will increase by an average of one tanker per day.

Kinder Morgan, though always present in the region, last had a significant workforce in Valemount during its Anchor Loop Project. An estimated 600 workers were employed in Valemount at the time.

Construction is expected to start in September 2017, with completion of the project expected in late 2019.
In May 2016, the National Energy Board recommended the Federal Government approve the Trans Mountain project, subject to 157 conditions, and the Feds subsequently approved the project.

In January 2017, the B.C. Provincial Government granted Kinder Morgan its environmental certificate, and also tacked on 37 conditions for environmental approval on top of 157 NEB conditions.

Kinder Morgan’s board of directors will make a final decision on building the project by the end of 2017’s first quarter.