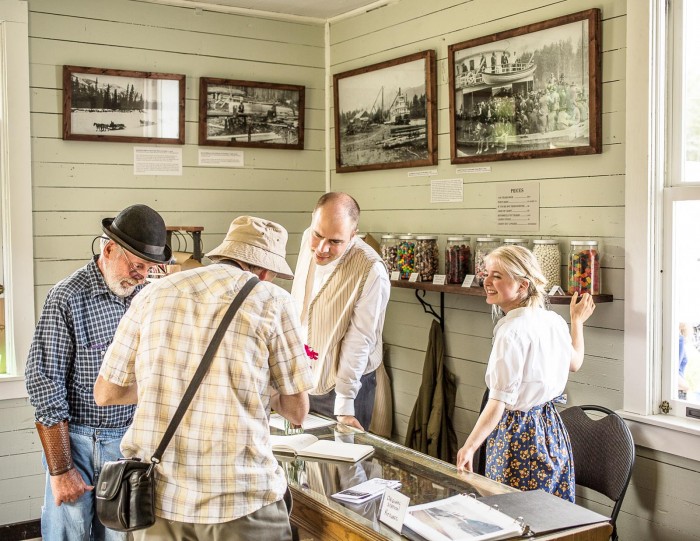 The old Dunster Station, recently renovated by the community into a museum, has received a prestigious award, honouring the community’s work in heritage conservation.

In late-February, Heritage BC announced the winners of their annual awards with a gala in Vancouver. The 102-year-old station, nearly lost in the 1980’s when CN was demolishing old stations they’d stopped using, was saved when locals bought it for $1 and relocated it just down the hill from the tracks, across the street from the Dunster General Store. The Dunster Community Association has received the Award of Honour in the Heritage Conservation category for the station.

“It’s quite an honour, and we’ve heard that we are the only museum in the northern region to receive it,” says Jill Howard, who spearheaded the restoration.

Heritage BC says the awards also emphasize innovation and commitment to heritage conservation that also contributes to environmental, economic, social, and/or cultural sustainability. Last March, members of the Community Association took on the task of removing toxic paint and asbestos linoleum before respectfully repairing the station to its former glory, sourcing antique items, hand-milled pieces created by local specialists, and painted in traditional colours.

Getting the museum together in time for Dunster’s centennial celebrations last summer was a very short timeline. “It consumed our lives, the whole family and community was involved,” says Jill Howard. But she says it was curator Heather Zahn’s vision that really made the project pop.

People have been contacting Howard to donate more items to the museum, like a plaque from the old Croyden school which burned down years ago. She has been contacted by a man who went to the school, and remembers the plaque above his teacher’s desk. After the fire, he went back to the site and dug around in the ashes to find it. He has kept the plaque for many years, and now wants to donate it to the museum. Other people are offering to donate an old piano, and a chair from the original station, bought at auction many years ago.

“People are looking at this museum as a place to share their memories,” says Howard. “I’ve only lived here for 40 years, it is an honour that these people would trust us with the things they’ve treasured and saved.”

“This year’s award winners have each taken forward-looking approaches to heritage conservation, planning and education,” says Kathryn Molloy, Executive Director of Heritage BC, in a news release. “In our thirty-five years presenting these awards, Heritage BC is proud to see so many individuals and groups across the province working creatively, collaboratively, to steward and share their local heritage.”

For a complete list of award winners, visit heritagebc.ca/awards/.

The Dunster Museum is closed for the winter, but is scheduled to reopen for the summer on June 1st. Zahn is also looking for photos of the station from last year’s reunion weekend they can share on the station’s new website, http://www.dunsterstationmuseum.ca/.