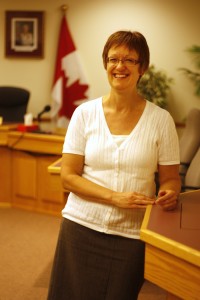 Valemount’s former chief administrative officer (CAO) has accepted a job as the CAO of Smithers, a town of 5,000 people four hours northwest of Prince George.

Smithers Mayor Taylor Bachrach says Yanciw brings an excellent combination of skills, experience and perspective to their organization, including 17 years of experience in local government.

“We’re confident she will be an asset in moving forward our strategic priorities, and will make a significant contribution to our town.”

Yanciw worked at the Village of Valemount for four and a half years, three of those as CAO. Before that, she was Administrative Coordinator for Public Safety Communications at the City of Calgary. Most recently, she served as Interim CAO for the Village of Lions Bay.

Yanciw replaces former CAO Deborah Sargent who left her position in August after being hired as the City Manager of the City of Campbell River.

“I feel incredibly privileged,” Yanciw said in an interview with the Goat. “I feel like the fairy of great places to work just smiles on me.”

She says she feels incredibly grateful to have been be hired as CAO in Valemount, which was her first time in that position. She was hired based on the recommendations of the former CAO of Vancouver and the former CAO of Whistler who performed a mini core review of the Village of Valemount in 2012.

She said she’s very excited to start working with the seven-person Council in Smithers.
“I think we share a lot of values in common.”

She says she has read their strategic priorities and Official Community Plan and loves their direction.

She says Smithers has many of the outdoor opportunities Valemount had.