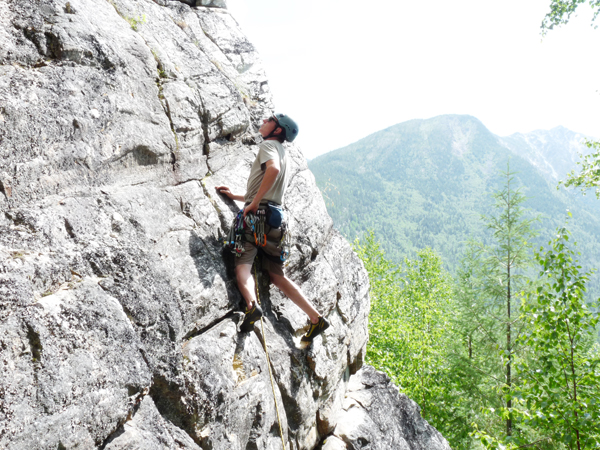 As the coming of winter approaches I find myself with mixed feelings. On one hand I’m as giddy as a six year old on a candy buzz the night before Christmas because ice climbing season is just a week or two away. On the other hand I know that come mid-January I will be looking back in longing on my summer’s adventures. Warm memories of days spent in the crags among the sheep and eagles. Massive sheets of grey rock like so many frozen waves on a vertical ocean, the smell of hot stones, dirt and moss; and the wind, always the wind. More important than these memories are the friendships and bonds which are created by high adventure. This season I have had the pleasure to hang out (get it?) with two locals who truly inspire me as a climber.

John Crowley and I first shared a rope when we climbed the Guides route on Morro Peak early this summer. John found his passion for climbing in 2000 when he came to BC from the US. A friend in the UBC outdoors club took him to Squamish and he was hooked. In 2008 John moved to the Robson Valley for work and soon found a deep love for the mountains. Over the last seven years John has found even greater joy in mountaineering and ski touring. These skills combined with John’s seemingly limitless energy have gotten him on top of many of the valley’s summits, including Mount Robson which he climbed in 2012 with Riener Thoni.

I first met Jesse Millner when he came to the valley for the CNC N.O.R.E program. A dedicated ski bum, Jesse soon found mountain climbing and over the last few years has become one of the more talented and humble climbers I’ve had the pleasure of adventuring with. A certified A.C.M.G ski guide and ranger at Mt. Robson Provincial Park, Jesse’s tenacious attitude, training, and experience have earned him the summit of many mountains, including Canada’s highest peak Mt. Logan, Mt. Robson twice, and dozens of other peaks and crags throughout B.C, Alberta and the U.S. This fall Jesse is traveling through the United States on a two month rock climbing spree, with the goal of climbing and learning as much as possible in order to pass his A.C.M.G rock Guides exam. Safe climbing Jess!

This summer the boys and I decided to visit a rarely climbed area up the Beaver/Holmes River valley. Due to the seriousness of this adventure we have decided to give directions to this crag solely to people with the experience and equipment necessary to safely handle the terrain. You know who you are.

After parking the car, a short hike brought us to our first obstacle; a fifteen meter long tyrolean wire strung across the river. Friends and I had placed the wire there roughly ten years earlier, and over time the cable haa slackened a bit, leaving a “belly” in our zip line. Being the lightest I was up first. I stepped on a large boulder and pulled the cable down, attaching my double wheel steel rescue pulley. Clipping directly to my harness, pack unzipped in case of emergency, I do a double check of my gear and then push off the boulder rolling gently down to the river. I pull myself up the last five meters of cable, unclip the pulley and send it gliding back to John. Three safe crossings find us on the trail and a few sweaty bug bitten minutes bring us to the base of our objective.

I visited this crag about two years earlier with my partner Tyler and we climbed the one bolted route on the cliff, then we picked our own way up and followed cracks and ledges to the tree line where we sat and took in the beauty of the river valley in full fall splendour. That was a great day; no bugs and superb friction. This day was the complete opposite; hot and greasy with a high chance of horse fly down pour! Jesse had also visited the crag a few years earlier with one of its developers who took him on his first crack climb; the crack Jesse was now preparing to lead. He had come full circle; and was now putting his hard earned skills to the test on a climb that at one time truly challenged him and still inspired him. It was a beautiful moment.

The climb was no give away; graded 5.10b it provided a good challenge for Jesse who would place his own protection consisting of small aluminum wedges and camming devices which were slotted in cracks then clipped to his rope with carabiners. Imagine an open book that is thirty meters tall and gently leaning on the shelf. Jesse was climbing the right “page” which has a lovely finger crack that snakes its way to a small tree and a nice flat anchoring area. John was on belay duty while I took photos and swatted flies. Jesse climbed the first ten meters with relative ease and stepped into the hard part with confidence. Using keen footwork and good rests, he placed two great pieces of protection in the thin crux and pulled through to bigger holds and a relaxed stance. The rest of the climb went smoothly, taking Jesse roughly 20 minutes to “monkey” up the face. He was soon on the ground sweaty and smiling having checked off another objective on his to-do list. He put John on belay and with the rope safely secured at the top of the climb he ran up the rock face with a huge grin on his face. On his way down John re-clipped a few pieces in the crack so when I climbed I would be on the same line as him and Jesse.

Being shorter than the other two, this route required some fancy footwork for me to climb cleanly. I found the same resting holds as Jesse, but my feet were on much smaller holds. Unclipping my crack cleaning tool from my harness I strained as I pulled hard on the good hold and gently tapped the aluminum wedge out of crack, clipping it to my harness. I placed my crack tool between my teeth and bite down hard on the taped handle as I grunt through the next few thin moves to another rest and another aluminum wedge. I repeated the process and workd through to the big holds and the anchors that waited above me.

After being lowered we decide to climb the other end of rope, which follows a multi-colored face of black and tan rock that ends at the easier finish to the crack. We pick our own ways up the face and end up climbing three different lines. I’m last and I choose a line in between John and Jesse’s, a relatively blank looking slab of jet black stone. The face is hot and I feel my climbing shoes soften and form to the thin edges. About half way up I run out of holds and must traverse left to continue upwards. I find a good hand hold and pull into it with my left foot stabbing out for a small ledge. The hold pulls off the wall and as I fall out and onto the rope screaming “ROCK!!!!” I watch in horror as the dinner plate-size saucer of rock flies through the air; striking the opposite “page” of the “open book” it splits perfectly in two and lands on either side of Jesse who has just caught my fall.

We stare at each other with open mouths in total disbelief of what happened and how bloody lucky we were. We have all spent a good portion of our lives in the mountains. This has happened before; chances are it will happen again. If you spend enough time in the mountains it is something you know is an eventuality. But it scares the living wits out of me, knowing I could seriously injure or kill a true friend or vise versa.

I give repeated apologies to the boys for the scare and we climb on through the afternoon, thankful in knowing we avoided what could have been an extreme situation, we talk about the incident in earnest and climb extra cautiously. We finish out the day on the easy bolted route just down the wall. John leads the route first and leaves the carabiners attached to the bolts so I can lead with the gear in place. I tie into the rope and Jesse puts me on belay. I don’t get two meters off the ground before I pull another block of stone off the wall which lands with a thump on my rope. “Shit”…. We all laughed because this cliff has been climbed at least a hundred times by various people throughout the years and I still managed to find a loose rock.

We hike back to the river with the black flies and mossies hot on our heels. I am even given a parting bee sting. Thanks.

A quick zip across the river and we are cracking into some creek chilled porter and munching the huckleberries that John carried back in his helmet (genius), smiles all around!

This is Ross Ballard reminding you to prepare for journeys end with your favorite libation. You may find yourself a little more motivated knowing there’s a cold one at the car. It works for me!