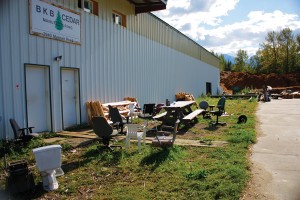 The McBride Community Forest Corporation has both logged too much and wasted too much wood in recent years, according to a statement posted by the company on Facebook. That’s left it “temporarily hindered” from providing wood to local mills, which appears to be leading to layoffs.

BKB Cedar gave layoff notices to more than a dozen workers last week. BKB is about to run out of wood to process at its mill, said owner Raj Basran, who added that the business is otherwise healthy and profitable.

The McBride Community Forest Corporation is shipping 10 loads of wood to BKB by Tuesday, September 8th, and said that Carrier Lumber will be able to supply BKB with thousands of tonnes of cedar in the months to come, the same statement said.

“The Board continues to work towards resolving the issue,” the statement reads.

The Corporation is allowed to cut approximately 50,000 cubic meters of wood each year, and if it cuts more than that it can face penalties from the Ministry of Forests, Lands and Natural Resource Operations.

The move to curtail logging comes less than a month after the firing of Marc Von Der Gonna, the Corporation’s former general manager.

Several McBride Community Forest Corporation board members could not be reached for comment by presstime.

It’s not clear how local mills would be affected if the Corporation stopped logging in its forests for the rest of the year. Some mills—like Basran’s, which only mills cedar—may rely heavily on it for wood that they have a hard time getting elsewhere.

Others are more adaptable. Midget Mills, for example, could look instead to the Valemount Community Forest for wood, or privately owned woodlots, said owner Len McCarty. It would make his job more difficult, but it wouldn’t be anything out of the ordinary.

“Looking for wood—it never stops,” McCarty said. “The long-term [of the McBride Community Forest Corporation] is more important than if I get wood in the next three months,” he added.

In terms of BKB Cedar, Basran said he would elaborate on his side of the story at Tuesday night’s Council meeting.

“It’s getting blown out of proportion. It’s best dealt with all parties in one room,” he said.

The Goat went to press Tuesday morning. Check our website for updates on this story.

One thought on “Layoffs pend as Community Forest halts logging”