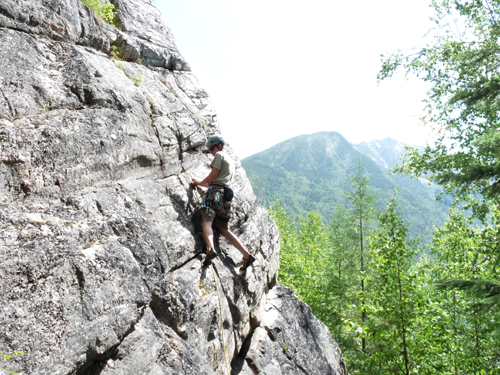 It was the fall of 2001, my friend Jacques and I had heard of a sport climbing area up the Canoe Valley which we had to go check out. It had apparently been cleaned and bolted a couple years earlier by the guides at CMH. We drove past the roadside cliff at ten kilometer which we had been climbing all summer and drove up the valley to twelve and a half where the bigger business awaited.

Just a couple hundred meters up into the trees loomed a massive cliff with a multitude of offset angles and huge overhangs. We raced up the trail to the base of the wall and the first bolts we could spot. The cliff face was amazing to look at; beautiful conglomerates of gneiss and mica formed stone that shines and glistens in the sun. Almost all of the climbs are vertical or past vertical with a wide variety of color and features making the climbs very esthetic. As we would find out, the folks who developed the area did a fantastic job of safely bolting some truly great and interesting lines up the forty meter cliff face; creating over a dozen bolted routes, some of which are two pitches (more than one rope length).

Since that first glorious trip up the Upper Canoe road I have spent hundreds of hours on this spectacular cliff face, which offers such a fantastic selection of climbs just a short distance from home, roughly 25km up the CMH road near Westridge. The climb is about 200m off the road, but you can see the cliff from the road. A few weeks ago I had the pleasure of visiting canoe crag with my friends John “Crawdad” Crowley and the lovely Grace McKirdy. The trail up to the cliff had grown in, so we started bush whacking and after a half hour of slogging through dense brush and blow down we arrived at the base of the crag sweaty and bug bitten; the coward juice (bug dope) had been left in the truck. We hiked up the grown in trail to the end of the bolted wall where my climbing brother Brian Kinelson and I had arduously dug out a small area of level ground. Using his imagination and his chainsaw Brian created a beautiful belay area that gives access to three bolted lines that increase in difficulty, two of which lead up to a second pitch of much harder climbing.

Technical rock climbing – where you a three-point stance and a rope and protection is needed is considered Class 5 climbing, and is subdivided into 15 categories – 5.0 being easy climbing that most anyone can do, and 5.15 being the upper echelon of super human insane monkey strength. The climbs above our little base are graded 5.8, 5.9, and 5.10+, making for an excellent place to warm up and get ready for the harder climbing lower down the wall and on the pitches above which offer great views and an exhilarating sense of exposure. John and Grace had never been to Canoe Crag before, so I let them have at it. I mistakenly pointed out the wrong starting bolt to John so instead of starting on an easier line, he ended up leading the 5.10+.

It was not an issue however, as “Crawdad” clawed his way through the bolts and stepped catlike up the crux of the line to a beautiful arching pinch that is almost too good to be true. A small traverse leaves him at the anchors and he is quickly lowered to the deck so Grace can have a go. Well into the tree planting season, Grace is strong and for lack of a better word, graceful as she works her way up the starting moves, stops for just a moment at the crux finding her footing and works her way cleanly to the lovely arching hold and the chains above. I’m up next; I am out of shape and I know it. Though I have led this climb perhaps a dozen times in the past, it feels difficult and forgetting my foot work, I start to feel the burn in my forearms. I strain and grunt my way to the anchors; it wasn’t pretty, but I made it go.

I secure myself to the anchors and untie myself from the rope, letting it drop so John and Grace can lead the route beside us while I shoot photos from above (A rare opportunity). John takes the initial lead and easily climbs the 5.9, his head popping up just a few meters from me; with the footwork of a veteran he smoothly works out the overhanging finish. Securing the rope to the anchor John is quickly lowered, and after pulling the rope and tying in Grace is ready to lead. Threading her rope through the gear that John has left behind, it is clear to see that Grace has taken advantage of living in the climbing mecca of Squamish B.C, as she works her way steadily through the crux and stands above the overhang with a big grin, climbing easily to the anchors.

After a couple more laps, we head down the wall and John picks his poison. Ten meters of bulbous white gneiss leading up into a two meter overhanging block of chunky stone broken by a diagonal crack. A few more meters of vertical climbing find one at the anchors. John works his way up the vertical white stone, clipping the last bolt before the crux; his dog Waylon starts to whimper in worry as John works his body up into the nook below the overhang and locks himself horizontally in the crack, clipping his gear to a bolt and securing the rope with a grunt Crowley works through the burly little roof, accidently missing the big finishing hold, he falls just short of a clean lead. With just a moments gaze at the route john quickly realizes his mistake and climbs strongly to the anchors.

Climbing the route on top rope, Grace has a strong go at the overhanging puzzle and tries every trick in the bag to unlock the crux. After thirty minutes of battling she comes down tired and rock torn. “Next time” She says with a sweaty chalk smeared smile. We pack up and head down to the truck. Thirty minutes of driving, and we’re seated on the deck of Three Ranges Brewery enjoying a cold pint, and savoring another rich day in the valley of the mountains.

Local climbers would like to thank Canadian Mountain Holidays for donating the hardware for Canoe Crags development; and a huge thanks to their brilliant guides for creating this vertical playground. It is regrettable that more residents cannot take advantage of this resource; hence the purpose of this article. We invite interested and experienced climbers to come enjoy Canoe Crag and help our tiny community of climbers maintain and develop this hidden gem, which requires just a little more “Love” to become a truly great sport climbing area.

This is Ross Ballard reminding you that it’s better to be a bug free coward than a fly ridden tough guy (girl), so don’t forget your bug spray!