You might not think an environmental consultant would want to see piles of wood debris burned. But Virgil Hawkes, vice-president and senior biologist with LGL Limited Environmental Research Associates, says the removal of the wood from Kinbasket reservoir, especially from certain marshy areas near the top of the drawdown zone, is helping re-vegetation efforts and improving the ecosystems in this unique area. It’s also proving that a reservoir is not the “dead-zone” many have assumed it would be in the past.

Hawkes has been studying the drawdown zone for BC Hydro since about 2008. He and some staff were in the Valemount area last summer attaching radio transmitters to Western toads, Columbia spotted frogs and common garter snakes in the Valemount Peatland, hoping to learn more about how they are using the drawdown zone, and where these animals are spending their winters. The peatland is about 550 hectares along the West Canoe Forest Service Road, from the Canoe River to about 10.5 kilometers down the road. It is a flat area just below the full pool mark of the reservoir, and it is covered in marshes, ponds and fens when the reservoir is below full pool – unusual habitat for this part of the province. Hawkes and a graduate student are back again this spring and summer, and Hawkes was able to sit in on a meeting last week of the committee that is directing the efforts to clean up the woody debris on the reservoir.

The original intent of BC Hydro’s woody debris program was to collect and dispose of the wood that at one time matted the surface of the reservoir, and to increase recreational and boat access and safety. It is part of BC Hydro’s Water Use Plan for the Columbia River. Approved in 2007, the Water Use Plan called for a large number of monitoring programs and physical works projects on the Columbia from Kinbasket Reservoir to the Canada-US border over 12 years. They are expected to provide benefits to recreation, fisheries, wildlife and archaeology.

This is the final year of the budget approved by the Comptroller of Water Rights for the debris program. If any more debris management is going to occur on BC Hydro’s dollar, it has to be approved by the Comptroller, and the committee intends to put together another budget request this summer to help set a direction for the final three years of the Water Use Plan. And members of the committee, environmental contractors for BC Hydro, and the company itself are all starting to recognize the value of working together and sharing information to help meet the goals of each project within the Water Use Plan. 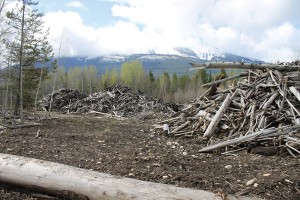 There has been definite progress with the debris program. Dean den Biesen, who works for BC Hydro and helps coordinate the debris committee and contractors, says people have actually been water skiing on the lake in the past couple of years, one very tangible result of the debris removal. But it is not in the maintenance phase originally expected by this time, and the committee feels they will need to ask for more money than they’ve had for the last two years.

Contractors have used a variety of methods for the cleanup, including corralling the floating wood with boom logs pulled by tug boats and using machinery on shore to pile and burn the debris. Each method has its benefits and drawbacks, especially given reservoir conditions at any one time. Members of the committee from Golden joined Valemount members, BC Hydro staff and environmental consultants on April 30th to discuss plans for the year, and how to move forward.

Den Biesen says the extreme high water conditions of 2012 were like a “reset button.” The calculations they’d made of the volume of debris (made by helicopter fly-over and mapping of the entire lake surface) were an estimate at best, but the high water that year brought the “bath tub ring” of debris that had gotten beached over the years back into the reservoir. 2013 was another high-water year, with the reservoir going above its normal full pool.

Members of the committee also discussed how each year, events like the blow out at Bulldog Creek two years ago, the flooding of Canoe River last year, and the erosion of banks at many sites along the hundreds of kilometres of shoreline are introducing new woody debris, which was never really considered when the debris program was initiated.

No one knows how much new wood in coming into the reservoir each year, and no one knows how much erosion is happening along the shoreline. But a trip to Griffin Sawmill campsite or a look across the lake from the West Canoe Forest Service Road at the trees on the verge of falling into the lake will show you it’s happening. Den Biesen says the original estimate was that there was a million cubic meters of wood floating in the reservoir, and he estimates 520,000 has been collected and disposed of so far. From looking at some particular sites he knows of where whatever gets removed one season gets filled in again, Hawkes thinks there might still be as much as a million. The mouth of Packsaddle Creek is one example he checked last week where it is filled in again this spring after everything was removed last fall. There is also even more wood clogging up “Pond 12”, the largest pond in the peatland, which is now half covered in woody debris – cutting its usability for the frogs, toads, snakes, salamanders, as well as the birds and other animals that might feed on them. 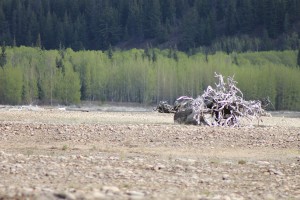 And no one in the room has seen the lake this high this early in the year. BC Hydro had forecasted a slightly-lower-than-full-pool year for Kinbasket back in March, but the weather and water flows, especially with the more common occurrences of extreme weather incidents, are proving to be unpredictable. Den Biesen says Hydro is now applying to the comptroller in case they have to bring it above full pool again this year.

Right now, piles of wood debris collected last fall by local contractor Dave Craig sit at a number of spots along the peatland, and will likely be burned this spring. Hawkes says the experimental boom log system they also installed last fall around one section of a sensitive wetland area has worked really well to keep new debris out of the area. It also seems to have protected the piles of wood, which may be a good sign that another experimental
idea for dealing with the woody debris might work. 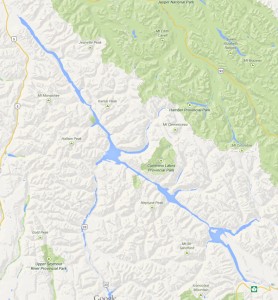 Mark Sherrington from BC Hydro’s Burnaby office was also at the meeting, and discussed an experimental idea they are considering – building large mounds out of the woody debris, soil and rock, that could provide habitat for vegetation and animals. It seems like a more environmentally sensitive way to get rid of the debris than burning it, though burning it is still considered a requirement by forestry regulations in the north to reduce the wildfire risk.

The original revegetation program, another part of the Water Use Plan, had mixed results around the Aarow Lakes, and poor results around Kinbasket. But Hawkes says he can already see the difference that getting rid of the debris around the reservoir does for vegetation. 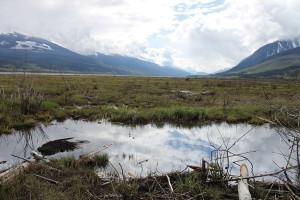 Den Biesen cautioned the committee that the number of people using Kinbasket for recreation is not very large compared to say the Arrow Lakes. But Randy Priest, who has been involved in a number of boards and committees related to the Columbia Basin Trust and the Columbia River Treaty says that Kinbasket makes a huge amount of money for BC Hydro. He says that needs to be recognized.

Mary Anne Couls, spokesperson for BC Hydro, says operations updates for Kinbasket and the Columbia River are planned for Golden on June 12th and Valemount on June 16th. More information will be available soon.