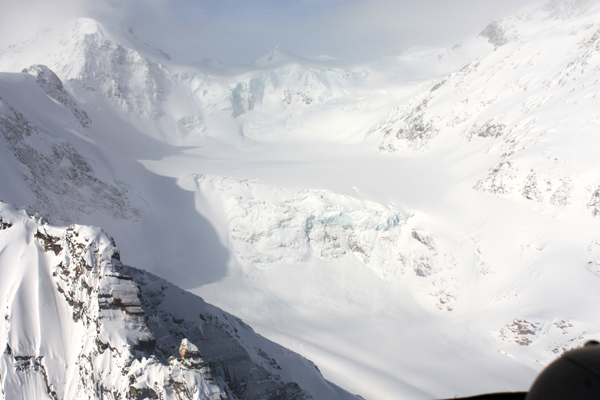 A new study from the University of Northern BC says the province will lose between 70 and 95 per cent of its glaciers by the end of the century. The loss has a lot of implications, but if you think that is a risk for proposed projects like the Valemount Glacier Destinations resort, you don’t know the whole story.

Brian Menounos, a geography professor at the University of Northern BC and Canada Research Chair in Glacier Change, helped propose the study and coordinated with researchers at the University of British Columbia, the University of Iceland, and the Pacific Climate Impacts Consortium. They used observational data, computer models and state-of-the-art climate simulations to predict changes in the area and volume of glaciers under a range of greenhouse gas emission scenarios used by the Inter-governmental Panel on Climate Change in their last major report about the state of the climate system.

The study found that glacier volume in western Canada will decrease 70 per cent by the year 2100, even at the lowest predicted range of greenhouse gas emissions. Surface runoff from retreating glaciers is expected to peak between 2020 and 2040, with substantially reduced flows expected for the remaining half of the 21st century.

British Columbia and Alberta contain more than 17,000 individual ice masses, says a news release to go along with the release of the study. These glaciers provide cool, plentiful water to many of the region’s headwater streams during late summer when seasonal snowpack has become depleted.

“The loss of glaciers has direct implications on aquatic ecosystems, hydroelectric power generation, mining, alpine tourism, and water quality,” says Menounos. “While the wetter Coast and St. Elias Mountains are expected to only lose about half of their glacier volume, the drier interior and Rocky Mountains are projected to lose most of their glaciers.”

A study by M. Reasoner last year noted that all glaciers have already disappeared from the catchment for Valemount’s Swift Creek, which has reduced summer flows in the creek that is the Village’s water source.

“The current warming trend is one of the reasons we believe ski resorts should be located at high elevations,” said Tommaso Oberti, spokesperson for Valemount Glacier Destinations in an email response after the release of the study. The Valemount resort site is at 3200 meters, and the Jumbo Glacier, another project Oberti is involved with, is at 3400 meters.

“Even if the Glaciers were to disappear altogether, which according to our understanding is still unlikely at above 3,000 meters elevation in BC, Valemount and Jumbo would be the only places in Western Canada that will continue to receive abundant snow at higher elevations in the winter months,” said Oberti. Also, he says the moraines created by retreating glaciers make for ideal ski runs in winter.

“Yes, summer skiing will be impacted,” says Oberti about the predictions for the rest of the century. “But this is a small part of the business which will be more than compensated by increased winter visits from skiers who will have few other options in Western Canada.”

“Keep in mind also that most climate models predict that precipitation will increase with global warming,” says Oberti. That means that while low elevation glaciers may disappear, high elevation glaciers may actually begin to grow more rapidly. “This phenomenon has been observed already in Alaska, Norway, New Zealand, the Himalayas and even California.”

Menounos says glacier reduction could also have implications for the Columbia River Treaty, an international agreement between the United States and British Columbia for cooperation on hydroelectric power generation and flood control. The treaty can now be terminated by either country with 10 years notice.

The study was supported by the Canadian Foundation for Climate and Atmospheric Sciences, the Natural Sciences and Engineering Research Council of Canada, BC Hydro, the Columbia Basin Trust, UBC, and UNBC. The paper, entitled “Projected deglaciation of western Canada in the twenty-first century”, was published online by the journal Nature Geoscience on April 6th.