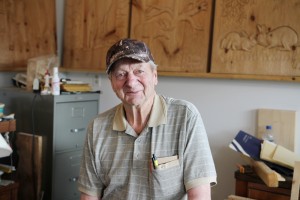 Henry Unger has an idea he thinks can bring the community together on a project, as well as attract visitors from around the world – a “living museum” at George Hicks Park, right off the highway.

The regional park on the edge of Swift Creek is already world famous for its salmon spawning grounds, says Unger, but the contour of the natural landscape around the park would be perfect to showcase trees and other plants as well as animals of the area.

Unger knows wood – he’s a carpenter and artisan, having built, carved and created many high quality and beautiful wood products all over the community. But he’s also interested in the trees themselves, and his idea could be an opportunity for the public to learn and for some specialists to share their knowledge about trees in our area. For example, the Community Forest and local foresters could share their experience and knowledge about forestry practices, earth conditions, and so on, both while the living museum is being set up and as part of the exhibits.

“Each tree should have its own sign, with a picture of the tree full grown, and information about the branches, the cones, the fruit, the bark,” says Unger. He lists off some of the varieties he’d like to see, many listed in a book he has called Trees of the Northwest by J. Duane Sept.

Will they all grow here? “Sure, sure they will. Many people don’t know the larch loses its needles in the winter. It grows here,” says Unger. There could be all sorts of native plants showcased, like blueberries, juniper, cranberries, huckleberries, native flowers. It could even showcase animals in a small museum – we have local taxidermists that could do the work, and there are many local specimens of fish birds, snakes, bears and other animals already mounted, says Unger.

The current park boundary is not really big enough for his idea, but Unger doesn’t see that as a problem.

“Maybe someone will donate the land, maybe it’s not much good for anything else,” he says. Maybe someone would donate the use of machinery to help build it, and locals who aren’t working can help too. He has an idea of simple paths through the park; make them 10 feet wide so they are easy for machinery to maintain, and build simple ditches for drainage. Build fencing to keep the dogs out and keep visitors from disturbing the plants.

Unger thinks it could become more famous than Butchart Gardens on Vancouver Island, an abandoned limestone quarry that is now a world-famous floral show garden, attracting almost a million visitors a year.

He says the site already attracts people from the highway, educators, world travelers, and the site is perfect, as it is right next to the Village office and already has parking.

“We can have the best of all,” Unger says. “It could bring the community together, bring more ideas in.” And it could be something the community could apply to Columbia Basin Trust for funding for, and maybe even create some employment.

“What do you think,” Unger asks. “Do you want to see this project happen?”