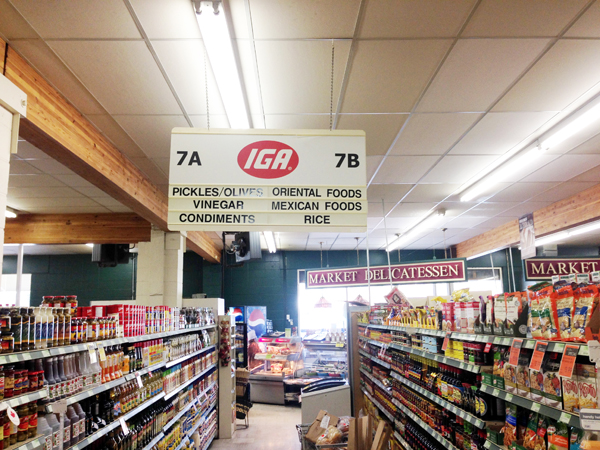 There are pickles and olives in aisle seven at the IGA in Valemount, along with vinegar, rice, and, until recently, what a sign termed “oriental foods” — sriracha, soy sauce, and that sort of thing.

Alden Habacon, the director of a program at UBC to increase cultural understanding, explains that it comes from the idea of a place called the “orient” — a place that never actually existed. Habacon says some consider “oriental” offensive and a racist word.

The word was still used to lump together diverse groups of people, as in 1941, when the government decided against drafting Canadians of “Oriental racial origin.” At the time, Canada was at war with Japan but also allied with China.

“It’s hard to separate it from the way it was used in World War II, in its worst way possible,” Habacon said.

And while categorizing foods as “oriental” is very different from the legally enshrined discrimination “oriental” people faced in decades past, Habacon argued that the signage trades on the same idea of “exoticism” that makes bigotry possible.

“And the question is, exotic to who? This is the staple aisle for some,” Habacon said. “And it reinforces the idea that this is not our normal. This is the other peoples’ aisle.”

Eight hundred and ninety people in Valemount speak English as their mother tongue, according to the most recent census data. There are five whose mother tongue is a Chinese language, five for whom it’s Japanese, and 10 for whom it’s Korean. No one speaks Lao, Burmese, or Thai — among others — as a mother tongue.

The Valemount IGA is owned by H.Y. Louie, which has 35 franchises of the grocer in British Columbia, and Valemount’s store is actually one of only a handful that still had signage for “oriental foods,” said Mark McCurdy, the company’s general manager for marketing.The store removed the sign shortly after the Goat contacted H.Y. Louie for this story.

McCurdy explained that the signs are getting switched out for an “international” section which is organized by country. That’s not to avoid offending people — they’ve never had a complaint about the terminology; and H.Y. Louie was actually founded by a Chinese Canadian. Instead, they’re changing it for modern customers with a more specific idea of what they’re looking for, McCurdy said.

“That’s not how people are shopping today,” McCurdy said of the old signage. “They’re much more experienced with different cultures.”

Sobey’s also owns a number of IGAs, and a PR representative there said that their stores are also changing over to an “international” section. They had received complaints about the “oriental foods” sign, however.

No one at the Valemount IGA could be reached for comment on the record, due to H.Y. Louie’s communications policy.