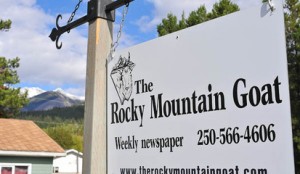 Valemount and McBride’s Rocky Mountain Goat newspaper has been honoured as the 3rd place winner of General Excellence and 3rd place in Best Front Page in our circulation category (up to 1240) in Canada’s national newspaper competition.

This is the first time the Goat has been honoured in the competition since it became a member two years ago.

The weekly newspaper is also in the running for a General Excellence award at the BC and Yukon Community Newspaper Awards. The gala to announced the first, second and third winners takes place April 25th in Vancouver.

The Newspaper Excellence awards recognize excellence in editorial, news, graphic design, photography, and layout, among others.

“On behalf of the Goat team, it’s an honour to be recognized as one of the top newspapers in Canada,” said Publisher and Co-owner Laura Keil. “We are always striving for excellence and will continue to do so.”

The Goat started as a 12-page newspaper in June 2010, the brainchild of Joseph Nusse who enlisted Laura Keil, a recent journalism school grad, as editor and business partner.

In 2011, Keil took over management of the newspaper while Nusse remained invested but outside of daily operations.

Most recently the Goat has hired Frank Green, a reporter based in McBride.

The Goat is one of just a handful of independently owned newspapers in B.C.