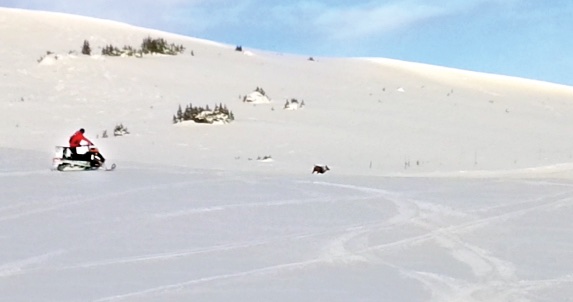 A video which appeared briefly on social media networks has prompted questions about how Parks Canada delegates human-wildlife conflict responsibilities.

On the morning of Feb. 10th, a short video showing a ski patrol sled at Marmot Basin “shepherding” a caribou off-piste was circulated widely among Jasper Facebook circles. Shortly after being shared around, the video was deleted.

Long-time Jasperite Travis Anderson saw the clip before it was removed. He questioned why Marmot Basin is allowed to manage wildlife and why they did so with a snowmobile.

“If this threatened species is to be managed, why is it being done by an outside party whose main interest is in providing winter recreation to visitors for a profit?” he said.

The video shows a caribou walking on the main piste of the upper mountain. When a ski patrol snow machine enters the frame, the animal increases its pace. The clip ends as the caribou is trotting towards Outer Limits, a closed run that drains into Whistlers’ Creek.

“In all of my research I have found that chasing wildlife or harassing them from motorized vehicles of any description is illegal,” Anderson said.

Since December, when eight caribou showed up in Marmot Basin’s upper bowl before bounding into the Outer Limits area, a lone caribou–dubbed “Frankie” by staff–has been frequenting the ski hill. Usually, Frankie stays off the main runs but ski patrol have had to take steps to minimize his chance of contact with people.

In this case, according to Marmot Basin, what the video doesn’t show is two groups of ski patrollers directing skier traffic away from the caribou. It also doesn’t show a group of skiers who ignored that directive.

“The patrollers were telling skiers to ski down Paradise and not towards Basin Run where there was a caribou,” explained Vice President of Marketing, Brian Rode, who got a sense of the scene from head of avalanche control, Kerry MacDonald. “[But] a small group of skiers ignored patrol and…cut up to see the caribou.”
Because there were now skiers blocking its path, MacDonald determined that there was a real threat of Frankie changing course and heading towards Paradise, where the public was.

“That’s when Kerry moved out with the sled to encourage him to continue to go towards Outer Limits,” Rode said.“Kerry in his best judgement made the determination that he didn’t want him to change direction and go down Paradise.”

Although its stint on Facebook was brief, the video was seen by Parks Canada wildlife experts. Resource Conservation Manager John Wilmshurst spoke for the agency when he wrote to The Jasper Local.

“Parks Canada has discussed the event with Marmot Basin and we are confident that under the circumstances, staff took the appropriate action to ensure the safety of the caribou and keep skiers at a reasonable distance,” he said.
The person who shot the video, Jasperite David Cizek, said he didn’t know the clip would cause such a stir when he posted it. He deleted it, he said, because he was nervous that its circulation would put ski patrol in an awkward position.

For his part, Anderson still has questions: How much energy does a caribou burn running away from a snowmobile? Why isn’t a Parks Canada wildlife specialist stationed at Marmot Basin? And, is there a double standard with respect to how caribou issues are handled depending on what business may be affected?

The article first appeared in The Jasper Local, an independent newspaper based in Jasper.