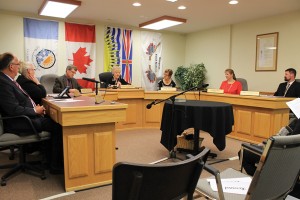 Council called a special meeting on Feb. 19th for third reading of an amendment to the financial bylaw to allow an organizational audit. Council approved the audit during a special meeting three days before. The change to the bylaw is required to authorize the spending of up to $20,000 for the audit. The funds would need to be transferred from the general surplus, which is currently at $237,105. It is unclear if an audit of this type has ever occurred for the Village before.

Fourteen residents showed up to the meeting on Thursday, and 10 residents submitted letters of support for the audit by the deadline for public comment on Wednesday.

Organizational reviews by municipalities are not overly common, but aren’t rare, says Anne Yanciw, Valemount’s Chief Administrative Officer. She says Prince George recently did a large review, and BC municipalities have a great benefit in networking and benchmarking with other communities, so they don’t each have to “reinvent the wheel.” Staff has benchmarked with a couple of other small communities that have done reviews recently, but the intentions and desired outcomes of a review can make the process very different between one municipality and another.

Council passed first and second reading of the financial amendment for the review in a special meeting on Monday afternoon, Feb. 16th. Public comment was accepted by email up to 4:30 pm on Wednesday, Feb. 18th. Ten letters, primarily from local business and commercial property owners were submitted, all strongly in support of the amendment and the organizational audit.

Donnie MacLean submitted a letter of support for the audit, saying we can afford to have an independent look to ensure we are heading in the right direction. She says an audit would bring in impartial experts to look at an organization’s structure, the people filling the slots, and how things could be made more efficient, which could result in changes to roles and duties.

“I think it is a good idea – complacency is not always a good thing,” says McLean.

Stuart Tait also submitted a letter in support of the organizational audit, and was at the special meeting for third reading. He says one of the benefits we could see from the review would be ensuring we have qualified personnel for the tasks required, and ensuring we are getting value for our tax dollars.

Arnold Wied was also at the special meeting, and supports the organizational review. He says there have been too many rumours circulating about questionable Council or staff actions over the past years.

“A professional, impartial review will allow our community to move forward in an atmosphere of trusting support from it’s citizen taxpayers,” says Wied.

John Peterson also supports the review. He says it will benefit the Village, and there may be savings an audit will discover.

Mayor Jeannette Townsend declined to comment until after final reading, which was not scheduled until after press time.

Thursday’s special meeting will not be televised or uploaded to YouTube. VCTV station manager Gord Peters says it was a busy week, and he wasn’t able to get to the meeting in time to set up the recording gear.

The amendment was scheduled to go to fourth and final reading at the regular meeting on Feb. 24th and a draft of the request for proposals (RFP) for the organizational review is also on the agenda. Yanciw says RFP’s are normally drafted by staff and don’t require approval, but because members of Council have suggested a variety of aspects to this review, staff wants Council’s input before finalizing the RFP.

The requested services listed in the current draft include a performance review of the CAO and an assessment of the staff/Council relationship, as well as a review of the organization’s structure, service delivery level, labour costs, staffing and workload levels, a comparative review of staff salary, wage and benefits, and of Council stipend provisions, a review of policies and practices to support professional development plans for employees, and recommendations for improvement and next steps.

Yanciw’s says Council may wish to consider hiring a separate consultant to facilitate relationship building, if they want that, as a consultant might not have both skill sets, and it would likely cause the bids for the work to be more than the approved $20,000. She says a performance review of the CAO has not been included in other organizational reviews staff has benchmarked with, but it has been included at Council’s request. It’ll be up to council to decide what to focus on.

A review like this can be stressful because of a perceived lack of trust between Council and staff, says Yanciw. “But it can also be a tool for building confidence.” She says it can identify opportunities for improvement, and she welcomes a review of her own performance, if that is what Council wishes. She is confident the organizational review will be a learning opportunity for everyone involved.

Yanciw says she is not aware of a review like this being done before, but after Tom Dall, Valemount’s former chief administrative officer left, Council called in consultants to help decide how best to fill the position. She said the consultants did individual interviews with each member of staff and Council. Yanciw was Valemount’s deputy corporate officer at the time, and she says the consultants recommended that Council look internally to fill the role CAO role. Yanciw was acting CAO when a local state of emergency was declared because of flooding in Swift Creek in June 2012. She was promoted to Chief Administrative Officer in September 2012.