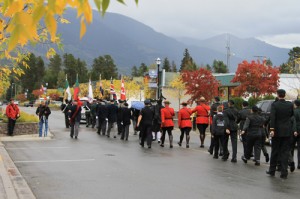 Submitted by the Valemount Legion Branch #266

The Royal Canadian Legion would like to invite everyone to stop by the Legion and check out the renovations and what the Legion can do for you, as a member and for your community.

Renovations were done to the kitchen after receiving a Columbia Basin Trust grant, enabling the Legion to have a wide menu and a safer kitchen, including installing a new hot water tank. The grant also included a major upgrade to our electrical and new, more economical lights.

Everyone needs to see our beautiful War Heroes Museum. It is located on the upper floor of the Legion and will be opened upon request. Members of the Valemount Legion Branch 266 have submitted pictures, memorabilia and documents pertaining to their loved ones who served with the Canadian Armed Forces and their allies. We need to remember that their sacrifices gave us our freedoms.

The next general meeting and election of officers will be Nov. 17th, 2014 at 7:30pm. We need to remember that the Royal Canadian Legion is run by volunteers, and in turn we support Veterans, their families and our community. We have contributed to Veterans and their dependants, the Meals on Wheels Program, the Valemount Ambulance Association, the Volunteer Fire Department, the Seniors, the Valemount Health Centre and the list goes on and on. It should be noted that Poppy Funds are public funds held in trust by the Royal Canadian Legion. The Legion is charged with the trust of overseeing their disbursement in an appropriate and straightforward manner. A copy of the 2013 Poppy Financial Report is available for viewing at the Legion.

Lending your help and support to this organization is always appreciated and very fulfilling. Please come out to the meeting and share your ideas.

Remembrance Day Service will be held at the Legion Nov. 11th. The parade leaves from in front of the library at 10:30am sharp. The wreath laying ceremony starts after the parades reaches the Cenotaph and the remainder of the service is held inside the Legion hall with refreshments served afterwards (hot dogs etc). The Legion Museum will be open for viewing and the canteen will be open.

The legion serves all veterans and their families, as well as the community at large. There’s one general meeting and one executive meeting each month. New volunteers welcome!

Methods to dispose of your poppy (no official protocol): keep it year-to-year, leave it at the cenotaph or throw it away. Can be worn from the last Friday in October until Nov 11th. Can also be worn to funerals of veterans.