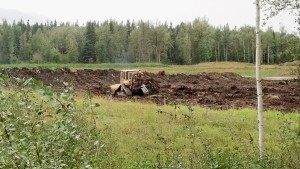 The Village of McBride has issued a tender for a woodlot, the last phase of community’s leading-edge biological sewage treatment system.

The system is designed to use biological processes to treat sewage and remove nutrients from the water before it is discharged into the Fraser River. It’s also designed to help reduce the total amount of water discharged, and to ensure higher quality of any water discharged.

McBride’s sewage treatment system was originally constructed in 1972 as a single treatment lagoon, and was designed to be expanded with a second pond. The Village says the system operated with little maintenance until Village staff began noticing problems in 2007. During the spring melt the piping seemed unable to accommodate the flows, and a “huge buildup of sludge” was found at the end of the pipes leading into the lagoon. The sludge was thick enough to reach the surface of the six-foot-deep lagoon, and could be seen from the air.

An information sheet from the Village on the sewage treatment upgrades says lagoons typically have sludge removed every 25-30 years. This lagoon had been operating for over 35 years with no maintenance, and without a second pond, removing the sludge was impossible. Environmental standards have changed over the years, and now require sewage be treated to much higher standards. The information sheet says Mayor and council decided to set an example for small communities in the north by improving the quality of water discharged to the Fraser River, and potentially eliminating it all together.

Tender for the second lagoon went out in June 2010, and the job was completed by Demidoff Equipment, at a cost of $750,000. The project also led to the establishment of the Phil & Jennie Gaglardi Park, creating a trail system and recreation opportunities for residents and tourists.

At the opening of Gaglardi Park in 2011, Rodney Sidloski of HELP environmental organization said McBride will be the first community in BC to prevent wastewater from entering an existing water body. He said Canada has to stop putting nutrients from wastewater into waterbodies, because it is plant food, not fish food, and McBride is the first community to recognize that.

“You are the first community to stand up and say ‘We want to do things differently’,” Sidloski said.

Tender for the third cell and wetland went out in July 2011. That phase of the project was started, but not yet complete when Dominion Creek overflowed its banks in June 2012, causing the Village to activate its Emergency Operations Centre. Flooding occurred at Gaglardi Park and at the trail system around the lagoon, and the lagoon liner was left with relief holes to prevent groundwater pressure from damaging the liner.

Eliana Clements, Chief Administrative Officer for McBride, says the third cell and the wetland are now complete, and Cell 3 has been commissioned. She says the Village has continued to work on various parts of the project, like planting the wetland, de-sludging Cell 1, hauling material and stockpiling for the woodlot area, and clearing and preparing the site for the woodlot development. Clements says the final figure for Cell 3 and the wetland is around $800,000. The woodlot will be commissioned once the cells and wetland are all filled.

Clements says there are other systems that use wetlands and woodlots, but she doesn’t know of any that use both like the McBride system. Chris Morgan, an applied science technologist with engineering firm Radloff and Associates who is helping to oversee the project, said this system is the most effective.

“Typically systems are treated to a certain permitted level, and we’ve designed this one to exceed the typical Ministry of Environment requirements,” said Morgan.

Morgan says it is designed to remove things like ammonia prior to discharge into the Fraser, but it is still tested at the discharge point. In the old system, ammonia and other elements in the effluent were not monitored, but they are now, under the new permits. He says it is not likely to occur, but if levels exceeded permitted levels, it would indicate a problem and some fall-back measure would have to occur, like stopping discharge. High ammonia levels can be toxic to fish, and too much organic matter in rivers and lakes lead to algae blooms, which can negatively impact the environment. The system is expected to reduce discharges into the Fraser River by at least 30 per cent, and to improve the quality of discharges by at least 80.

“It’s a low tech solution to treatment, and showcases what Mother Nature is capable of,” says Morgan. “There is no energy input other than the sun and wind.” He says the entire system occupies close to 40 acres, so it’s not really feasible for a place like Vancouver. But in a small community where you have the room, it is a win-win, because it has also created a recreation area, as well as creating habitat for wildlife.

The new sewage treatment system consists of three treatment ponds, a wetland and a woodlot, that together, store the sewage much longer, allowing better treatment from three forces: biological activity (bacteria and other organisms feed on the sewage; plants like bulrushes, reeds and trees absorb nutrients and water); wind which breaks up the sewage solids and adds oxygen, allowing more bacteria to grow; and sun, which is necessary for biological growth and for disinfection.

The information sheet says the three lagoons are designed to hold sewage for 150 days (the old single pond had decreased to only 30 days). The wetland should hold the sewage for another 50 days (as well as providing habitat for waterfowl and amphibians) and in the final stage, a large depressed area planted with a variety of trees should uptake much of the remaining water and nutrients. The woodlot cannot operate year round though, so the Village will continue to discharge to the Fraser River, though the discharge will be greatly reduced, says the Village. Maintenance of the system once completed will be occasional mowing and removing vegetation, and de-sludging every 25 to 30 years.