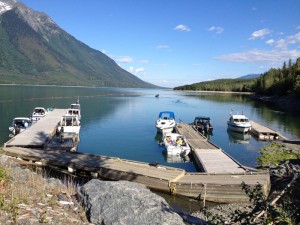 A windy Saturday morning on Kinbasket Reservoir meant a late start for many boaters and fishermen at the Valemount Marina’s annual Mini Derby this weekend. However with the new boom log protection system, more boaters were comfortable leaving their boats in the water overnight so they could get an early start on Sunday morning. Marina Association president Owen Torgerson says the boom logs are still a work in progress, and a number of options have been considered to make the bump gate easier to use. However final improvements to the gate may have to wait until low water next spring, he says, due to the difficulty of working with the boom logs while in the water.

Almost 30 participants entered the Mini Derby, looking for the largest rainbow. Brian Risterer weighed in the largest rainbow in the men’s division at 1010 grams, and Karrie Iselmoe won the ladies division with 535 grams. Seven boys and girls under-16 entered, but as none of them weighed in a rainbow, the proceeds will go towards maintenance and upgrades of the playground.