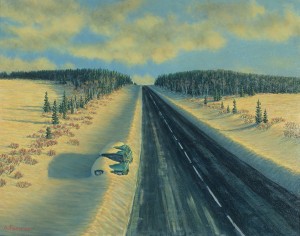 Two Rivers Gallery is bringing “Far Away,” an exhibition of paintings by Prince George artist Allan Farmer to the Valemount Museum.

Farmer created the paintings between 1997 and 2012, while working in the forestry industry around Prince George. His work offers a view into the industry and the environments he worked in. The collection will tour four communities in the Regional District of Fraser-Fort George, starting with the Valemount and Area Museum, from July 26th to August 18th, 2014.

Farmer was well known for his representations of landscapes drawn from Prince George and its surroundings. He moved to the city in 1998 where he worked in the logging industry while juggling his love of art. Over the years a number of his paintings offered a window onto the industry in which he worked.

Farmer died suddenly in March 2014 leaving behind a body of work that stands as a compelling document of life in the Central Interior of BC. George Harris, Curator at Two Rivers Gallery, said “we were shocked and devastated to learn of Allan Farmer’s sudden passing. We had discussed with him the possibility of developing a small exhibition of his work to tour the Regional District a few years ago, but there was insufficient work. Because of a generous donation of Farmer’s paintings as well as a loan from a private collection, we are very pleased to be able to organize this exhibition this summer.” This exhibition draws upon that legacy offering a unique reflection on who we are and where we live.

A short publication will accompany this exhibition including a brief introduction by Curator George Harris and a short essay by Curatorial Assistant Audrey-Anne V.LeBlanc, both at Two Rivers Gallery. The catalogue considers Farmer’s paintings and includes a brief history of the artist drawn from interviews. The catalogue will be available at exhibition venues and can be used as a guide to the exhibition.

The public is invited to the Valemount and Area Museum for an opening reception on Saturday July 26th at 12:00 noon.

Also, a workshop called “In Situ: Working Art in Places of Labour” will be led by Maureen Faulkner on Sunday July 27th from 11:00 am to 2:00pm. The participants will create a work of art, focusing on preliminary drawing and developing a final design, on an industrial site. Similar to how Farmer established harmony between nature and industry, the public will endeavour to find the beauty of industry. This workshop is free (materials included) and pre-registration is required. Please contact Valemount and Area Museum to register and for more information.

Two Rivers Gallery would like to recognize the continued and generous support of the Regional District of Fraser-Fort George for making this project possible. After Valemount, the exhibit will be in Mckenzie in September, back to the Two Rivers Gallery in Prince George in October, and then at the Valley Museum and Archives in McBride in mid-November.