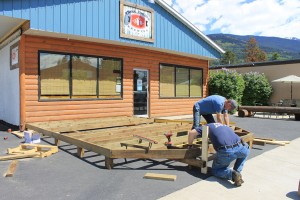 Construction has started on the patio for the Three Ranges Brewing Company, but it might not be as big as some local residents expected.

Owner Michael Lewis recently got approval-in-principal for a licensed lounge and patio area for Valemount’s own micro-brewery. One of the requirements of the endorsement is that the patio be in direct line-of-sight with the current tasting room, so the patio will only be on one half of the front of the building, facing 5th Avenue. He’s recently received approval for funding for some of the construction from Northern Development Initiative Trust’s Business Facade Program, administered this year by the Valemount Chamber of Commerce.

A Brewery Lounge Endorsement would allow the sale of the company’s beer to patrons in a lounge area as well as on a patio. It also requires the sale of food and non-alcoholic beverages, and would still permit minors if they are with a parent or guardian. The brewery’s current license is for retail sales and a tasting room, which limits each patron to the equivalent of one glass of beer a day.

Lewis told the Goat recently he was hoping to be able to serve just cold food, but the licensing branch requires he serve hot food as well.

The provincial Licensing Branch would still need to inspect after the patio is constructed and food plan is in place before issuing the lounge endorsement.