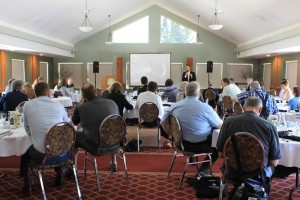 The Trans Canada Yellowhead Highway Association held its 68th Annual General Meeting and 2014 conference in Valemount over the May 16-18 weekend.

The TCYHA is a non-profit association established in 1947 “to promote the development, maintenance and use of the Yellowhead Corridor as vital to Canada’s national transportation system and national unity,” says its website. The association includes communities from four provinces along the highway from Winnipeg to Masset and Kamloops, and is open to municipalities, businesses, organizations and individuals “who support the goals of promoting the use and development of the Yellowhead Highway Corridor.”

Chief Rita Matthew, leader of the Simpcw First Nation, opened Conference and AGM with some words of acknowledgement on Friday.

“I want to acknowledge the land, the resources, the animals, everything that lives and grows here in the northern part of what our people call the Simpcw territory,” Matthew told the group of about 40 people representing communities along the Trans Canada Yellowhead Highway as far west as Manitoba.

“This corridor belongs to all of us,” said Matthew, noting the highway was built on original trails from back when the seasons dictated when people moved around. She says the Simpcw people have a desire to work with communities and industry, and they have rights and titles that give them opportunities. Those opportunities allow them to improve their lifestyles, which has given them hope and purpose to improve their lives.

“We have no wish to be superior or wealthy,” says Matthew, “we just would like to have a comparable lifestyle. Everything we make goes back into the communities.”

Parts of the conference were open to the public, including presentations from Oberto Oberti, president of Pheidias Project Management, Glenn Mandziuk of the Thompson Okanagan Tourism Association and Craig Dunn of Borealis Geopower.

Oberti, proponent of Valemount Glacier Destinations, gave a presentation on Winter Tourism in Western Canada, and what makes Valemount the perfect place for a ski destination – the right latitude and elevation, world class vertical drops, and an ideal climate. He says the idea that a resort has to be within two hours of a city is a fallacy, and as soon as you create a destination you are not remote any more. Oberti also says everything that makes Valemount right for a winter destination also makes it ideal for a summer destination, and the world sightseeing market is even bigger than the skiing market.

Glenn Mandzuik, Chief Executive Officer of TOTA spoke about the challenge of getting an area the size of Ireland to work together to create experiences, rather than seeing each other as competition.

“Tourism fixes potholes in the streets and builds recreation facilities for the community,” says Mandzuik.
He says tourism is the largest employer in the Thompson-Okanagan area, bringing in $1.7 billion in revenue last year, a number that wasn’t even tracked five years ago. He says our competition is from other countries, and TOTA’s 10-year regional tourism strategy, signed on to by all 90 communities in the region, will increase the region’s market share. 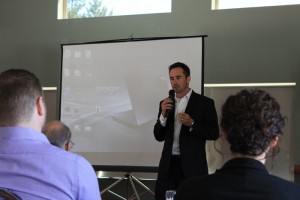 After making two short geology presentations at Valemount Elementary School earlier in the day, Craig Dunn explained to the conference how Borealis Geopower is hoping to use hot water from the Rocky Mountain Trench under Kinbasket Reservoir to generate electricity. He explained how Canada is the only country in the entire Pacific Rim that is not doing it yet, although the technology has been around since 1904, and how geothermal power is different from a geoexchange system, often called a heat pump.

“The cool thing about geoexchange is you are using electricity to move heat around,” said Dunn. “We’re the opposite of that – we are moving heat around to make electricity. They are both earth heat resources, they are just on a spectrum.” He says they are working toward a local, distributed energy program, they are a Canadian company that has community support, and they will help make the electrical transmission system more robust, and another benefit to the community can be using the “waste heat” similar to the way Klamath Falls, Oregan does to heat commercial and government buildings and to melt snow from sidewalks and bridges.

“Valemount did an awesome job in hosting the AGM and Conference,” said Ken Starchuck, Regional Director for Area H. He says there were lots of positive comments from the delegates from all four provinces, and he especially enjoyed Joe Nusse’s presentation about climbing Mount Robson.

The AGM portion of the conference was scheduled for 10 am on Sunday, and John Wojcicki, Chief Administrative Officer for the association, says about 30 people attended. He says the resolution proposed by the City of Edmonton to have the Trans Canada Yellowhead Highway designated a route of “National Significance” was passed.