Work to protect Swift Creek salmon habitat for the long term – and the Village of Valemount’s water supply – has started, but it will be a long process before the four identified riverbank sections are completed.

Severe spring run-offs in June 2012 caused the collapse of two clay banks upstream from the Village’s water intake and the Golden Years’ Lodge, which affected the Village’s water supply and damaged salmon spawning areas downstream. The high water and debris washed away areas of gravel the salmon need for laying eggs, especially near George Hicks Park. Thousands of people visit the spawning grounds in the park each year, and it is a big tourist draw to the region. Bruce Wilkinson, who runs the visitor information centre with his wife Wendy Dyson, saw that the spawning grounds near the viewing area was at risk, and started getting people together who could address the situation.

Wilkinson says Fisheries and Oceans Canada was called and a plan was designed by Wallis Environmental Aquatics out of Salmon Arm to repair the areas in which a slide could reoccur in the future and cause even more damage downstream. The Swift Creek Restoration Society had not been officially formed yet, so Mike Wallis applied to the federal government for funding, and received $66,000 from a program set up to conserve recreational fisheries.

Wilkinson says two of the sections of bank that are slated for repair are difficult to access, and can’t be completed right now, including the clay bank highest up, just where the Swift Creek Trail climbs up the hill from the creek. The clay bank they are working on is closer to the water intake and is accessible by a resident’s driveway. Wilkinson says Wallis has been working with Village staff to manage the turbidity of the water for the Village’s intake. He says lower thresholds of suspended particles are required for the village’s drinking water than Fisheries and Oceans Canada requires, which means Wallis’ crew has been working short hours.

Wallis told the Goat he has heard complaints that no local economic benefits are coming from the project, but he says that 59 per cent of the project funds have been spent directly in Valemount, “and we are working with several good local folks in getting the work done.” He has also offered the Goat a tour of the project when it is closer to completion, so he can explain the rationale and benefits. 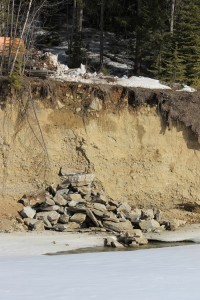 “It has mutual benefit for fish, residents, business and the Village in creating conditions that foster salmon spawning, reducing particulate matter and turbidity in the water, and creating more secure and resilient creek banks for flood preparedness.”

Yanciw says the work is being done by an environmental consultant working closely with Fisheries and Oceans Canada, noting there was no opportunity to contract the work out because of the expertise required.

Wilkinson says there will be further project phases to enhance the spawning areas available to the returning salmon. One phase is an application to the Columbia Basin Trust’s Community Initiatives Program for fencing and a larger viewing platform in George Hicks Park. He says he hopes that improved fencing and viewing areas will be kept visitors out of the water while the fish are spawning.

Wilkinson says the project has also been supported by Kinder Morgan which has funded an educational program in the schools. CBT’s Environmental Initiatives grant allowed them to do the studies to prove this project was needed and feasible.

“I hope that Valemount will welcome the workers doing this project with the warm welcome we extend to all our visitors,” says Wilkinson.