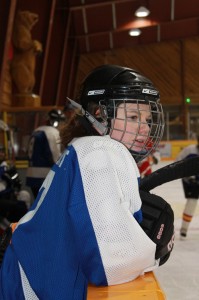 Story and Photos by Chris Parker

The McBride Arena was a busy place last weekend, with the Armed Forces Challenge Match on Friday evening and then the McBride Maniacs Ladies Hockey Tournament taking centre stage on Saturday and Sunday.

The Maniacs which started 21 years ago hosted their 18th annual woman’s Hockey Tournament in the McBride arena. This year the four invited teams included; The McBride Powerhouse, The Edge from Prince George, The Mustangs from Hinton and the host team, the McBride Maniacs. With the games starting at 8 a.m. on Saturday the 15th and the bronze game and the championship tilt happening on Sunday morning ( running into the early afternoon) there was non-stop action all weekend long. Resplendent in blue/black/white/and brand new red uniforms the ladies provided first class entertainment for the fans dropping in to watch the games.

At the end of the tournament the Maniacs proved to be good hosts after they absorbed a 6-1 setback from the Mustangs in the bronze medal game. In the final the Edge prevailed after scoring twice in the last three minutes to win 3-2. This game was very even and a back and forth encounter with the Edge finally taking the lead as the clock wound down. Notwithstanding the tournament victory by The Edge, the McBride Powerhouse won the Most Sportsmanlike Team award.

The tournament was a rounding success with all having had a good time. There was an injury in the Saturday afternoon game and a player from the Hinton Mustangs was taken off the ice on a stretcher. Although we have been asked not to identify the player we are happy to report that she has been released from the Prince George Hospital and has come through her ordeal with what looks like a concussion.

Saturday night saw tournament players at the McBride Hotel for a night of music and fun.

SarahBressette, the tournament organizer, presented the trophies to the winning teams along with a selection of framed pictures to individual players. The coaching contingent, the officials, time-keepers and arena personnel were all thanked for their participation.

The week of March 9-15 saw the return to McBride of three bus loads of armed forces personnel along with numerous support vehicles, intent on practising various winter mountain terrain manoeuvres. These activities were practised in the Bell Mountain and Mount Lucille areas. While in McBride the group utilized the Community Centre and the adjacent Rec Centre for their accommodation and shower facilities. Their home base in Edmonton, (the former Air Force Base) is essentially flat having formerly housed a major airport facility and now houses seven different Battalions. They first came to stay in McBride three years ago while enroute to and from Quesnel and enjoyed their stay and the facilities here and thus have returned this year for their third visit. As they pointed out it is for the most part different personnel each year as a result of changes within the personnel, so it is a new experience and locale for most of the group with the exception of the senior personnel.

One of the favourite activities of these visits is an opportunity for the Armed Forces to say thank you to the village by their personnel, by playing a challenge hockey match against the McBride Old Timers Hockey Team. This year was no different and so on March 14 a healthy crowd filled the arena where the two teams faced off for the third challenge of the trophy presented by the Service Battalion for the competition. Each of the previous visits found the McBride team able to handle this challenge handily and thus maintain their hold on the trophy. On this occasion the Army, intent on redeeming themselves, brought in a bus load of hockey players that arrived specially to play in this game (separate from those involved in the exercises). However the McBride Old Timers redoubled their efforts and after relinquishing an 8-2 lead were forced to play into overtime as a result of a 9-9 final score. It was with only 1.28 minutes left on the clock in the overtime that McBride scored the winner and thus retained their trophy!

The good natured camaraderie between the teams was evident as they gathered later in the curling club lounge for beverages and to relive the game. Early the next morning the buses and trucks were loaded and returned home to Edmonton promising to return for the fourth time next year…and another opportunity to wrest the much admired trophy from the McBride team who simply let them know…that they would be here!

Admission to the game included a significant donation of foodstuffs to the Food Bank as evidenced by the pallet of food by the entrance door to the arena. Truly this was a win win for both the Armed Forces and the Village of McBride.