Approximately 200 visitors were in McBride Feb. 8 – 9 as our village hosted the annual Ladies Curling Bonspiel and the Men’s Old Timers Hockey Tournament. Divided almost equally between the two events, visitors came here from Vanderhoof in the west, Grande Cache and Hinton in the east and all points in between. All came here to have fun, get a little exercise and visit with old friends. For the local economy these events together provide a significant boost as hotels and restaurants were full, and stores got a few extra clients across their thresholds.

With the theme of ‘Redneck’ evidenced in the attire of many of the curlers, the warm smiles and friendliness was readily noticeable. The lounge and viewing gallery and our delightful 2-sheet curling rink provided the venue for the event which has been a popular winter highlight for more than 35 years. The curling club was formed in 1976, and it is thought by long-time members that the first event was held within the first two years and each year since. The Old Timers Hockey Tournament which goes back even longer was accidentally held at the same time on one occasion. This was immediately recognized for its happy synergy and the two events have been held side by side ever since. 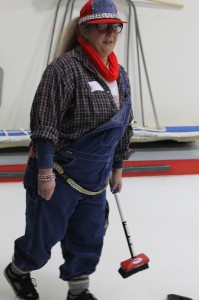 Prince George, Grande Cache (Alberta) and Vanderhoof, while curlers arrived from all the above locations plus two strong teams from Clearwater and another from Jasper. Several McBride rinks filled out the 16 rink spots on the draw card.

With the Saturday Night Banquet the perennial highlight event, Sunday morning saw several late arrivals, some with sore heads. Still the costumes and the witty comments abounded as curlers reminisced about the previous nights hijinks.

Brad Kope was kept very busy in the Curling Lounge providing lubrication for the competitors and Len McCarty kept the curling ice in first class shape, while the Library/Museum catering team provided the dinner on Saturday evening. Over on the hockey side, the regular Regional District Ice Team looked after the ice and the catering was provided by various hockey parents who used the event as a fund raiser to look after some of their ongoing expenses.

The community of McBride rallied to the cause and the final hockey game between Valemount and McBride saw perhaps 150 filling the stands and enjoying the tight hockey game. But competitors we spoke to at both events all talked about the good times and friendly rivalry between the various teams. All stressed that winning and losing was not what this was all about; it was about memories and sharing a good time with friends made as a result of many of years of joint participation.


For the record Vanderhoof won the A event hockey tournament with the Quesnel Gold Panners taking the B event and McBride taking home 3rd place overall. The curling contingent from Clearwater once again provided some stiff competition for the other teams with the Anderson Rink ending up nipping Laurie Kimpton in the A event curling final. Jenny Quam defeated the Van Dijk rink in the B final and Christa Barnes won the C final, proving that on this one occasion that ‘Git’ er done’, didn’t. Cathy MacMaster received recognition for her attire and unflinching good attitude, winning the Best Bonspieler Award.

Congratulations to all those working behind the scenes to make this such a successful event, one that benefited many throughout our community and provided a great deal of enjoyment for so many others!