About 100 people attended the public hearing last week for the zoning change of a vacant Main St. building that would allow a library, museum & cultural centre to move in.

At the meeting, McBride Village staff members read out 24 letters received prior to the hearing; Mayor Frazier then opened the floor and 10 people from across the Robson Valley gave their thoughts.

Of the letters and spoken comments, all but one were in favour of the zoning change.

Trevor Jones, retired school teacher and resident of the Robson Valley for over 30 years, spoke in favour of the zoning change. He noted

“the construction of 521 Main Street was a dramatic improvement, in terms of design and construction. Its location, close to the entrance to town, welcomes one, and invites one to “come on down” to the rest of Main Street.’”

He also said “that this project did not receive immediate support from the council of the Village of McBride when first suggested, makes me question the “vision” of our leaders, but it is not too late!’” 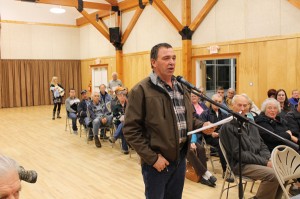 Jones recommended that Council approve the rezoning and addition of Museum as a permitted use, and that they get behind the project.

Greg Clements stated concerns about the loss of commercial space and the commercial tax base, as the Public Institutional zoning takes away the potential for commercial development in that spot. He said he feels the existing public spaces are under-used, and the existing library and museum are more than sufficient.

The Main St. building owner and applicant for the zoning, Tom Ryan, asked that he be able to make his presentation after the public had an opportunity to speak (normally done before the floor is opened to the public), and Mayor Frazier accommodated the request. Ryan noted that the maintenance and heating of the building will be a fraction of the cost of other existing buildings, and that he has offered the building for the Library/Museum for $500,000, far below the replacement cost of $1.2 million. He noted that the community has been divided over a number of issues over the past few years, and he believes that this project has the ability to unite it.

Third reading of the amendment was scheduled to go to Council at the October 22 meeting. If it passes, it will need to be approved by the Ministry of Transportation and Infrastructure before going to final reading.