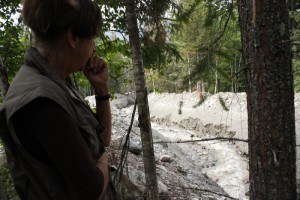 It’s beginning to show signs of abandon: the lawn is a meadow; the garden a playpen of weeds. Inside the house, an older generation of linoleum shows through where fridge and stove used to hum. Dead flies gather on the window sills.

It’s been one year since Christa Maxeiner was forced to flee from her Hwy 16 home in the middle of the night, after her “romantic creek” broke its banks. Two-metre boulders sprung from the channel and a wall of mud pushed debris through Maxeiner’s land and across Hwy 16 below.

The highway was covered in more than a metre of mud and closed for 24 hours. But Maxeiner’s property is still off limits. A risk assessment report completed by AMEC Environment and Infrastructure last summer says it is too dangerous for her to return. But as of yet, she has not received compensation for the loss of her property and house. Nor does she know when, or if, this will happen.

“I have been patiently waiting for a resolution,” Maxeiner says.

Maxeiner, 76, an immigrant from Germany, moved to Canada in the early 1990s with her husband. One of her sons was already in Canada. They chose their property because of its “romantic” nature she says.

A child of the Second World War, Maxeiner says one of their refuges during the war was in her grandparent’s old water mill located next to a beautiful creek.

“The little brook – the bubbles, the water… I always looked for water. I love water”

When they bought the property, the developer had given them a signed document that stated “based on a physical examination of these lands, and after conferring with the Department of Transportation and Highways, McBride, B.C., the Developer is not aware of any flooding danger to these lands.” But not long after the Maxeiners moved into their romantic new property, did they discover the creek’s dark side. Leona Creek blew its banks four times in the first 11 years they lived there.

After the first four slides, AMEC did the first study in 2004 stating that the property is “unsafe, unstable, hazardous and dangerous.” Maxeiner hired a lawyer to try to obtain damages from the Provincial Government and Regional District of Fraser Fort George but got nowhere.

Then last year, after a period of heavy rain and snow melt, Leona Creek nearly took her house downstream. The stream is estimated to have risen 2-3 metres above the streambed. An AMEC report estimates the June 2012 event moved 5,000-10,000 sq metres of sediment – roughly the size of a football field. Debris came within 5m of her home.

Maxeiner says she awoke suddenly, unsure of why, and went to get a drink. She had a funny feeling and poked her head outside. She saw the ground “shimmering” and heard a strange rustling noise.

Moments later, Const. Howard Price of the Valemount RCMP was pounding on her door. Price had stopped to help a car that was stuck in the mud that had sliced across the highway. He noticed Maxeiner’s property upstream. She remembers him asking for her car keys. Mud had already collected behind the bumper of her Ford Escape. He drove it to safety just in time. She didn’t have time to grab much – just her case with legal files. Outside the smell of mud hung in the air.

After spending a few days with neighbours, the provincial emergency program set up Maxeiner in hotels in Valemount for about two months. She was offered “housing” in McBride, what she understood to be social housing, but she turned it down because she preferred to live in Valemount closer to her friends.

With the help of her son Ralf, she borrowed roughly $70,000 to buy a new house on 9th Ave. She is still paying property taxes on her condemned property. She says she needs the payout from her 4 Ha property to pay her debts and move on with her life.

An AMEC report conducted after last year’s slide says “It is judged that the property will always be at an unacceptably high (unsafe) risk of debris flow impacts unless major mitigative works are undertaken.”

“It is very difficult to predict the magnitude, timing and run out pattern for future events,” the report reads.

The report says protection from larger magnitude events would require significant engineering more work on the creek bed and diversion berms that would need to extend to the top of the alluvial fan (a fan of sediment built up by the creek where it flattens out from its mountain course upstream). The company estimates the cost of this would be “many hundreds of thousands of dollars or more,” well beyond the cost of the property itself. The report recommends that the property no longer be used for permanent residence.

Five-foot berms guarding the creek are what Maxeiner now sees when she looks through her kitchen window. The BC Ministry of Transportation and Infrastructure used excavators to re-establish the channel from Highway 16 to about 30m upstream from Maxeiner’s home. Her little bridge was destroyed by the debris. Her “romantic” creek just a memory. She said it was devastating when she read the final AMEC report last August saying it would always be unsafe to move back. Her entire 4 hectares of land is at risk, so there is no place they could relocate the house.

Visiting the property this June, Maxeiner surveys her land quietly.

“It was a wonderful property,” she says. “It’s changed. It is so fast growing in.”

This is the second home she cannot return to. She says the whole scenario brought back “bizarre memories” from the war when her family was forced to leave their farm in Western Prussia in the early morning hours of Jan. 21st 1945. The temperature was -25 with icy winds. Maxeiner was eight years old and they were out on the road in horse and cart, being followed by the Russian army.

Her property now looks like unkempt pastureland. She and her husband had invested thousands in renovating and upgrading the old house that used to stand there. They created a “parklike” landscape around it.

Maxeiner’s husband’s ashes are buried between two old fir trees on the property. A cross marks the location. It is further from the creek than the house.

She plans to collect the urn to move to another location when her children are able to join her. The roots of the fir trees are now clutching the urn.

She says she is relieved to be meeting with manager of property acquisition with the provincial government this week. She says the province has cited numerous deadlines to her that have all come and gone.

“It has not been easy for me,” Maxeiner says. “But I have stayed positive.”

A spokesperson from the Ministry of Transportation and Infrastructure says they plan to work on the site to protect government infrastructure by addressing debris filling the creek, covering the road, and preventing culverts from functioning.

The Ministry has already built a deeper ditch within the highway right of way to increase holding capacity for debris and to minimize the material that reaches the highway.

Ministry staff and staff from the local maintenance contractor say they are monitoring the watercourses in the area on a regular basis.

The Ministry of Technology, Innovation and Citizens’ Services says the maximum eligible Disaster Financial Assistance has been approved by EMBC for Maxeiner’s property. The file remains open until the land issues are resolved.

Story and photos by: Laura Keil