Climbing a mountain with 10-pound boards strapped to your feet doesn’t sound like a good idea does it? In truth, people who plan their equipment better have an easier time. But it says a lot that slogging uphill for six hours, my heart beating so fast it was like I was watching it struggle in front of my eyes – all that was redeemed by what was at the top. It’s like I suddenly forgot the pain, and all I could think was, “I’m in Narnia.” 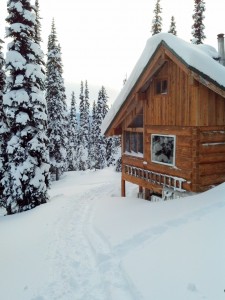 It wasn’t just because I was on the verge of hallucinations. It was like I had entered a snow globe – so quiet! The trees look like they’re alive! And there was the cabin – majestic! Even better than I’d been imagining for the past six hours.

Sometimes the most inaccessible hotels are the best ones.

Being a backcountry ski-tourer is not everyone’s shtick. Being a backcountry ski-touring beginner is an even more extreme sport. Yet, time and again, as I barrelled towards tree wells, the view of the opposing mountain ranges, the crisp air, the trees seeming so… jolly… I couldn’t help but feel like a bratty kid in Christmas wonderland by pouting each time I got stuck. Where was my holiday spirit?

I was happy to learn later on, that my skis really were death-traps. Vindicated! It seems few other people can ski on them either.

Much of our time in the mountains was spent in the gorgeous yet rustic Hermit Thrush Cabin, built by Annie and Gordon Carson and friends. Anyone can rent the cabin which is, at least in the wintertime, quite inaccessible, but well worth the trip. I can say that with authority.

Why live in Valemount if you don’t live part-time in the mountains? I ask myself that everytime I leave my office and stare up at those peaks and ridges.

Just make sure you’ve got the equipment you need.

You can learn more about the Hermit Thrush Cabin at www.hermitthrushcabin.com