As the Valemount Glacier Destinations all-seasons ski and sightseeing project plods forward, it has so far avoided the controversy and naysayers that have beleaguered the Jumbo Glacier Resort proposal in the Kootenays. Apart from the local heli-ski tenure operator Canadian Mountain Holidays, the project has had few vocal opponents. While many remain skeptical until they see construction, the project has received support from the local government as well as the Valemount Ski Society, which has garnered about 230 members. The project has also largely flown under the radar in provincial and national media. 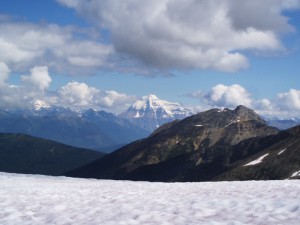 Vancouver-based architect Oberto Oberti, lead designer and proponent for both the Jumbo and Valemount projects, was quoted in the Globe and Mail last week saying he would favour Valemount for investment rather than the controversial Jumbo project, if he were to start over today.

“If I was to start now, I would say to my original clients to go to Valemount, not to this one,” he was quoted, referring to Jumbo.

The Valemount project and the Jumbo are similar in the sense they would both create a year-round ski and sightseeing destination using lifts and providing access to glaciers. Last spring a delegation from several French ski companies came to BC to learn more about both the Jumbo and Valemount projects. While the visit was reportedly not about making investment promises, Oberti went on the record saying the same investor could feasibly back both projects.

Some key differences exist between the two projects: while the Valemount resort would be built adjacent an existing highway and close to the Village of Valemount, the Jumbo is planned for a remote wilderness area, some 55km from the nearest town of Invermere. The Jumbo would also be located within a few hours of several other ski resorts, albeit they are smaller and at lower elevation. Oberti says the cluster of resorts would rejuvenate the ski and mountain sightseeing industry in BC, making the region a world-class destination. Some opponents say skier visitations have dropped in North America and it will only add to the glut of ski areas.

Jumbo’s Master Development Agreement was approved in March 2012, following a 20-year review. One local First Nation, the Ktunaxa, has vehemently opposed the plans arguing the area falls into their sacred traditional territory and is important habitat for the grizzly bear. Many others have opposed it on cultural and environmental grounds.

The $450-million Jumbo resort is planned in three phases and would eventually include 5,500 bed-units in a 104-hectare resort base area.

Last week, the provincial government approved the incorporation of Jumbo as a mountain resort municipality. Appointed as Jumbo’s first mayor and councillors are Greg Deck, Nancy Hugunin and Steve Ostrander. The Province says selection of council members “was based on several suitability factors including local government experience and knowledge of the region.”

No residents currently reside in the Jumbo municipality. The building site was a former sawmill site. In May 2012, the Province amended the Local Government Act to clarify provincial authority to incorporate a mountain resort municipality whether or not there are residents in the area at the time of incorporation.

As far as the Valemount Glacier Destinations project goes, the province has received the Formal Proposal from Oberti’s architecture firm for and is currently reviewing the application. Once approved, the province will issue an interim agreement, at which point proponents can occupy the land to develop more detailed plans for the Resort Master Plan and its review process.