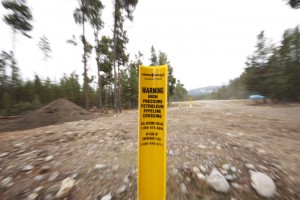 I answered an automated phone survey some months ago, asking my opinion on the possible expansion of Kinder Morgan’s Trans Mountain pipeline. The survey was being done (if I remember correctly) for an Albertan politician, and I remember wondering why they would be calling a Valemount local number, but I figured they were just trying to gauge the response of people in the areas the expansion would affect. I was kind of angry that they would ask this question through an automated system, putting me on the spot to give an answer, and not letting me talk to a person to explain why I have that opinion.

The first 2 response options were expected – was I in favour or against the pipeline expansion. I am neither fully for, nor fully against the pipeline expansion, so I was not going to choose one of those options. The third option was “not sure or don’t care.” I was again angry – it doesn’t seem right to have those two options lumped into one. I think being unsure is very far away from not caring, but I suppose that is the one of the dangers of distilling people and opinions down to numbers. But the fourth and final option was actually most suprising to me – did I think the existing pipeline should be removed. I have to admit, in my suprise and anger, I picked that last option, but it’s not fully what I believe (making it even more clear to me how useless and misleading most opinion polls probably are).

Recently in the mail, we’ve received an opinion poll on the same topic, from Cathy McLeod, our MP in charge of Responsible Resource Development. Her options are more simplified than that telephone poll, either for, against, or not sure, and she at least gives you the time to consider your answer before you choose to send it back to her. But I am still not comfortable answering in such black and white terms.

For example, Ms McLeod suggests it would take 1400 trucks per day to transport the amount of oil that flows through our local pipeline. Is that how the oil would be shipped without the expansion, by truck? Would they all come down our highway? First of all, that sounds like a lot of jobs, for truckers and all the people in support services along the route (restaurants, gas stations, mechanics, etc). Is some of this oil being transported by truck now? Could having that much traffic on our highway mean it needs upgrading to say a 4-lane divided highway? Would that make our highway safer? Would it be worth the cost? I mean the costs of having that much traffic through our area, not just financial costs. I would imagine that 1400 trucks per day would run considerable risk of accidents and spills, potentially causing loss of human life, and environmental damage. Also, the fuel needed to run those trucks – well, that just seems like a vicious cycle of burning oil to ship oil, raising costs all around, and in reality, that is likely one big reason why it won’t be shipped that way. The high price of oil justifies using more expensive means to extract it from more difficult pockets, and that could easily be canceled out by having to use the finished product in order to produce it. So maybe if the pipeline doesn’t go ahead, then the oil won’t get extracted. Unless it gets transported through another pipeline, to somewhere else.
Ms McLeod suggests that the Trans Mountain pipeline supplies much of the gasoline consumed in the Interior and Southern BC. Does that mean it is currently being processed here in BC? And if this expansion doesn’t go through, will the oil get shipped through the proposed Gateway or Keystone pipelines, to be processed by foreign countries only to be sold back to us, maybe for much higher prices? Really, how does that make sense? But it’s happened before, it happens all over.

Ms McLeod also notes that the federal government this year “dedicated $13.5 million from its budget to expand the number of pipeline inspections and increase capacity for emergency preparedness.” In my opinion, that is backwards. The government should be conducting inspections, setting regulations and enforcing penalties, but it should be at the cost of the companies building and using the pipelines, not the taxpayer (who is already paying tax on the finished product).

What I want to know is who will benefit most from the expansion of this pipeline. The oil is coming from Alberta, are they getting all the benefit? Do we here in Valemount just get the temporary jobs and the temporary boom in the service industry while the pipeline is being constructed? We sure don’t seem to get lower priced fuel.

I want my government to be creating policies and regulations that make it sensible and economically viable for Canadians to sustainably harvest resources, process them and use them, creating jobs, good quality products, and value for all of us (not just the 1%). And instead of asking me whether or not I support the pipeline, I want to be asked “Under what circumstances do you support a pipeline expansion?” Here is my answer:

If a pipeline is regulated and inspected by the government, at the expense of the company building and using the pipeline – AND – if those affected by the building of the pipeline (humans, animals, environments) see some benefits – AND – if the product is processed and used in Canada, creating ethical employment for Canadians and high quality product for Canadians first, and then offered to the rest of the world – then I support the pipeline expansion. In fact, I would support any pipeline in Canada with the same stipulations. And if that doesn’t make sense economically, then I think our government should be finding ways to ween us of our dependency on this non-renewable resource. That might not fit in one of Ms McLeod’s check boxes, but I believe I can mail any letter to an MP at no charge.