A fire was crackling at the Simpson sawmill this week, but it wasn’t a second harbinger of danger. Instead it was a campfire to keep warm as the three members of the Simpson family worked in the muddy mill yard to set up their new mill on their property near Tete-Jaune.

“We are hoping it won’t snow until December,” said Linda Simpson, hair tied back, wearing work gloves and old jeans. Her son Dean Simpson and husband Larry buzzed around the yard in CATs, moving and organizing as the first bridge timbers and planks came off the new machine.

“It’s not quite like the last one,” Larry said, taking a break and staring out at the new mill. “It took me about a year to get the last one to where I wanted it; I’m guessing it will take about the same amount of time for this one.”

It’s just the family now working to restore the mill that burnt to the ground in August under what the RCMP deemed suspicious circumstances. While they didn’t have insurance on the mill that had only stood there one year, Larry and Linda Simpson were determined to try it again. The fire was the third time a suspicious blaze broke out on their property, which is also where they live.

The Simpson’s trucked up the new mill from Vernon and got the parts moving on it last week. They have some new orders already and are completing some old ones. 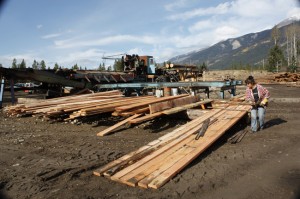 As Larry directed his son Dean to move another piece of equipment, a flatbed rolled up to load some bridge timbers for a local bridge project.

Larry says they won’t be looking to take a lot of orders before they refine the mechanics of the mill. The new mill currently has about half the capacity of the old one. He won’t be hiring any employees either, not until the mill and his pocketbook are on solid footing.

The old mill produced mainly bridge timbers out of Douglas Fir they bought from the Community Forest.

Linda Simpson says new orders from Alberta mean the new mill should produce no waste – the sawdust and chips from the slabs will both be sold.

“It’s not a huge amount of money, but at least it’s used,” Linda says.

With so many warm October days the family hopes to get more work done before the snow flies.