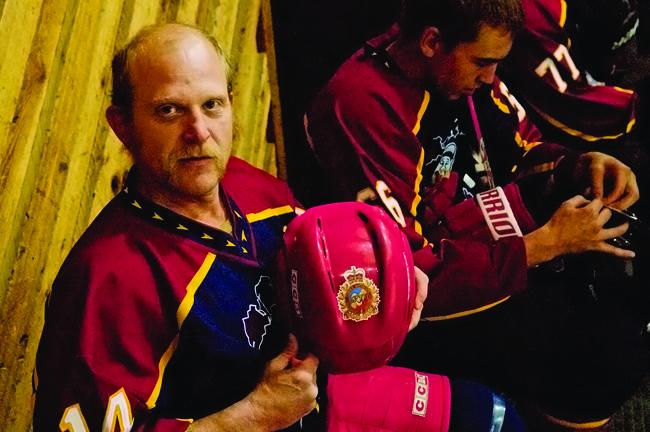 The McBride Old Timers took on the Canadian Forces last week – and won.

The hockey game, which the Old Timers team won 8-6, was organized as a fundraiser for the food bank. The First Service Battalion from Edmonton lent some of its members to the game.

Since September, members of the Edmonton base have been renting out Robson Valley Community Centre and using it for sleeping and feeding troops, as it’s halfway to the Quesnel area where they travel for training.

Lyle Lewis, recreation facilities manager for the regional district, says the Canadian Forces members have now completed the training they require in Quesnel and the hockey game was the last time they will be in McBride for the foreseeable future. Over the last month, many different groups have passed through on their way to the Chilcotin.

Lewis says this is the first time they have used McBride as a halfway point. With up to 130 military vehicles, a caravan from Edmonton can take much longer than the six hours it takes in a car – McBride made a sensible place to rest for the night before carrying on.

He had the idea of the hockey game and asked the forces if they would be interested in doing one as a fundraiser for the Food Bank. He then assembled a team of both regular old timer players as well as others from 16-year-olds to 60-year-olds.

“It’s hard to do when you don’t know what the other team is like. I just picked a little bit of everybody,” Lewis says.
He says both teams were roughly evenly matched in terms of age and skill.

“It was an incredible game.”

In 2011, the Food Bank served 99 adults and children in the community and delivered 190 hampers.

“We’d really like to thank the hockey players, the military and the community for their generous donations to the Food Bank and their ongoing support,” Holland says. “Our stocks were getting a little low. This gives us a nice boost.”

The food bank is operated by the Seventh Day Adventist Church in McBride.

In addition to the food bank, some of the donations will go to McBride Secondary, McBride Centennial Elementary, McBride Elks and Royal Purple, Beaverview Lodge and McBride Minor Hockey.