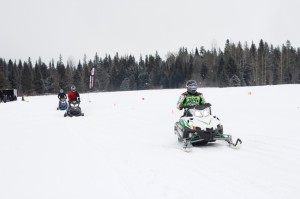 The number of trail passes sold in McBride during the 2011-2012 season nearly doubled from last year and is the highest in at least five years.

“If we keep up the good work and promote our snowmobiling as a viable business, everyone in our town will benefit,” he says.

Miller attributes the record numbers to an earlier snowfall in November and a good snowpack throughout the season.

Another contributing factor was the price of trail passes which decreased to $20 per day from $25, more or less a standard rate for the province, he says.

In December 2010, the club increased the trail day pass rate to $25 up from the original $15. Miller says the club received many complaints and probably lost some business. In February, 2011, a motion was made to decrease it to $20. Miller says once word got around people started coming again and the rate has remained at $20.

The McBride snowmobile club also did an advertising brochure last year listing all the direct benefit businesses in the area. They included GPS locations for all the cabins and emergency numbers. The club printed 5,000 copies and distributed the pamphlet at the snow show in Edmonton in October. Miller says they then distributed brochures to contributing businesses who had paid for advertising and handed out copies to all snowmobilers at the trail pass collection stands on every hill so all sledders had the information.

“I think most everyone appreciated the brochure,” Miller says.

The McBride area is still seeing sledders but since the lower access to hills no longer has snow and grooming has stopped, they have no way of calculating the number of riders.

Miller wants to thank the many sledders who visited the area and hopes they come back for more good riding for years to come where McBride and the McBride Big Country Snowmobile Association will continue to welcome them.

Miller says he would like to thank all the participating businesses, including the motels, restaurants, bed and breakfasts, pub and hotel, grocery stores, repair shop hardware store, and the Husky station, tour guides, local helicopter, hospital, RCMP, emergency personnel and LDM. He gives special thanks to El-Jay Grooming for trail upkeep, Darvin Goodkey, Bob Learie, (MCFC) and Rod Cornelius for prompt service for clearing the roads and parking lots at Lucille, Bell and Renshaw, respectively, on short notice, and to the volunteer club members for cabin maintenance and other concerns.

Miller adds that without the continuing help of Elaine Gillette of Ministry of Forests, Lands and Natural Resources, for signage, trail brushing, bridge repairs, and snow removal, the club would be faced with more than they could handle. He also thanks locals and businesses donated cash for propane in cabins, for family day and for other unforeseen costs.