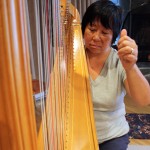 Harpers’ colony. No, it isn’t our Prime Minister’s shovel-ready plan to give his family jobs. The harp players are not on the provincial government’s slate either.

But wait. These well-postured musicians are hauling their instruments many miles in search of the perfect spot to nest. And McBride may benefit from their choice.

Last week more than a dozen harpists gathered at a hotel in McBride for a week-long harp retreat. Members of the public were invited to concerts and to try out a harp for themselves.

Harpists plucked from a number of options including private lessons and ensemble work – and at affordable rates, organizers say.

Next year will be the big year, as organizers get ready to promote the event at the World Harp Congress in Vancouver. Their marketing pitch is simple: McBride may be out of the way, but it is quiet, affordable, and friendly.

The people of McBride will most certainly benefit from the harpists’ choice.

Two weeks ago, I drove down to Kimberley, B.C. to meet my Grandma for the international old-time accordion championships. It’s been running for 37 years.  Today the festival sees upward of 3,000 visitors. They fill the streets. They fill the hotels. Their RVs fill the campgrounds and the lawns of obliging locals. My grandparents once camped in someone’s front yard.

But the dubbed “accordion invasion” began much more humbly.  An article from the local paper describes the festival’s first year in 1974:

The year it began was only two years after Kimberley made it its mandate to become a “little Bavaria.” Over the years, the accordion championship grew in attendance, size and reputation as the only old-time accordion festival in North America. People flocked from all over the globe to eye the bellows of names such as Myron Floren.

Accordions are hated by many, but for those who hold a stubborn love of the instrument, being surrounded by people who appreciate the music is like a homecoming. Many people come back every year, says organizer Jeany Irvin, and sometimes it’s the only time they see certain friends.

The event is a huge plus for the Kimberley economy. Volunteers come from all over to help.

“I think it’s more important than anyone can imagine,” Irvin says. “It brings a lot of people to town.”

Kimberley, population 7,000, was home to the largest lead-zinc mine in the world until it shut down in 2001. While the city took a hit, its identity as the “Bavarian City in the Rockies” and events such as the accordion festival ensure its economy remains viable throughout the year.

Irvin says hosting the event in a smaller centre has many advantages. The friendliness of the town, the un-crowded streets and the excellent campgrounds are all suited to hosting. She says their best advertising is word of mouth.

Unlike when you play the accordion, strumming the harp is unlikely to get you nailed in the head with a pillow by your roommate.  But the obscurity of the harp still means you’re unlikely to find too harpists or instructors nearby. The event could grow into something that draws harpists from around the world.  They will come listen to the melodic strumming reverberating through theValley.

Read the full story on the McBride Harp Colony