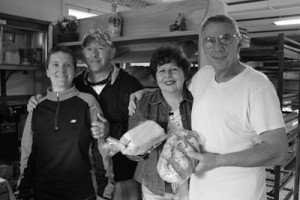 After a decade of waking up before 4 a.m., serving people from around the world and keeping their recipes a secret, Manfred and Natalia Zumbrunn are placing Valemount’s Swiss Bakery into new hands.

Come July 1st, the bakery will belong to Silvia Jungo and Bogdan Wasaznik, a couple who recently moved from Edmonton to take over the business.

“They’re young, full of energy, full of ideas,” Natalia says. But after all the years, she says Manfred is hesitant to see it go. “It’s his child and he’s nervous about all this. But that’s it: his time is over.”

Manfred was in the bakery kitchen last week, busy as ever.

At 65, Manfred says while he will no longer have to cater to the ever-busy bakery, he will continue to bake on the side. He grew up in the Alps in Switzerland where he helped out with his family’s store, and began baking as a teenager.

Manfred purchased the bakery property 10 years ago, when it was still the old post office. After many renovations, including a new roof, it became the building that now stands on Main Street.

“People stop here from all over,” Manfred says. He developed all the recipes himself. “They stop for world-famous strudel, stollen, home-made bread.”
But he insists he’s not retiring.

“I’m just going to bake from another place.”

Jungo and Wasaznik plan to continue with the same recipes, but will add washrooms and will start making cinnamon buns. Wasaznik baked in Germany for six years, then for Costco for 20 years – doing a lot of baking for smaller bakeries.

Jungo is from Switzerland ad Wasaznik is from Poland, but both moved to Canada many years ago. They would meet in Valemount, as it was halfway between Edmonton and Kelowna, where each was staying.

They say their goal with the bakery is to keep making people happy.