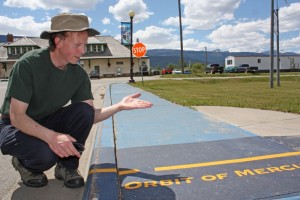 Matthew Wheeler is looking for earth. It’s somewhere between the McBride info centre and First Avenue.

“Right about here,” he says, swivelling around.

The sun is the globular lamp light at the end of Main Street. None of these planets rotate, but Wheeler has charted their orbits perfectly.

“There’s the real Venus there,” he says, gesturing to the roof of the train station. In its real orbit that is where Venus would be according to his model.

He has marked on the sidewalk where each planet would be if it were lined up with the other planets. Saturn is about 400 m from the sun near the McBride entrance sign and Pluto is two kms away on the other side of the Fraser River.

The idea, Wheeler says, is if you have a tiny moon and hold it closer, it’ll look the same size as the real moon. It’s also to give people an idea how far apart the planets are and how fast you have to travel to go between them. The scale is ten billion to one.

“We’re travelling faster than light speed,” he says, walking down the sidewalk where every so often we come across painted yellow stripes denoting how far each planet travels in a day around the sun.

Wheeler hopes the permanent installation will encourage visitors and locals to re-think the immensity of our universe – and explore the city centre a little differently. He gave tours during Adventure Weekend in McBride where star gazers could see the real Saturn, Mars and Venus.

“It’s really an aid to the imagination,” he says. “You think how impossibly, stupidly small they all are and now just think what we’ve actually seen with spacecraft that have travelled to these far-out places.”

A spacecraft at this scale would be a few atoms big. Because the planets are perfectly to scale, you can get an accurate view of how big the sun would appear from any planet if you look back at the lamppost.

Wheeler says he has been gazing at the night sky near McBride since he was a child and was shocked at the immensity. Jupiter, the fifth planet from the sun, is more than halfway down the street.

“It’s still almost the brightest thing in the evening sky,” he says, sheltering his eyes to look back at the sun, now just a tiny dot at the end of the street. “And yet how little sunlight is getting there.”

He says it’s discouraging to think about humans ever finding another solar system with a star like the sun that could support life. The nearest star according to this scale model? Antarctica.

Wheeler hopes classrooms will use the exhibit for projects – creating their own scale planets, for example. He hopes kids will gain a better understanding of our solar system.

“The kids` books are really nice to have, but they show these big fat planets piled up on each other on the same page and it gives a false idea.”

The installation will include plaques that explain the project. The blue sidewalks painted four years ago provide a perfect backdrop, he says. He has painted dots on the sidewalk denoting the size of the planets – most are no bigger than a grain of sand relative to the sun lamppost.

You can walk the whole route and it is wheelchair accessible – though Uranus, Neptune and Pluto are on the other side of Highway 16.

The model solar system was made possible with the help of the Regional District of Fraser-Fort George, The McBride Community Forest Corp., The Village of McBride, Robson Valley Arts and Culture Council and many other volunteers.

Wheeler warns that anyone wanting to see Saturn and Mars will need to look in the next week or two because Earth is leaving them behind. Venus, which is so bright it can be seen in daylight, is easy to spot in the west at twilight, and will become brighter as it catches up with Earth.