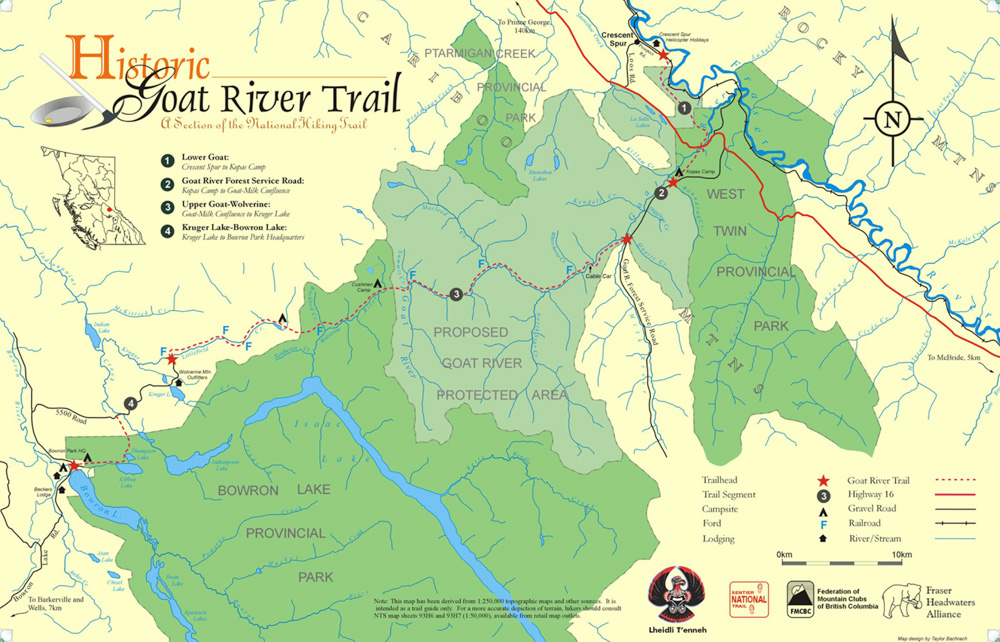 The goal of completing B.C.’s section of the National Hiking Trail got a boost in the form of a $203,000 grant to upgrade the Historic Goat River Trail.

“We would not have a cross-Canada trail without the Goat, or without any of those trails that are historic up there,” said Patrick Harrison, president of the National Hiking Trail and biology instructor at University of Fraser Valley.

The Historic Goat River Trail was originally commissioned in 1886 as a gold rush trail along the Goat River, allowing men to pan for gold along the river. During Prohibition in the early 1900s, the route was also used to deliver bootleg liquor to railway construction camps located on the Fraser River.

The trail was reactivated by Fraser Headwaters Alliance in the late 1990s to bring attention to environmental issues in the area and protect the Goat River watershed, which hosts spawning grounds for Chinook salmon and bull trout among others.

The money will help Fraser Headwaters Alliance with essential upgrades to keep the trail functioning, including fixing a river-crossing cable car system near the Milk river trailhead and building a 17-kilometre reroute to move the trail off a deactivated logging road and around a clearcut.

“The cable car is pretty good itself, but it needs to be lifted up off the water and stabilized,” said Howard. “Right now we’ve got the support cable just hanging on a couple of trees and we want to get it up so it’s free-standing and a lot more solid.”

The construction will require treated timber, metal supports and concrete, as well as specialized knowledge and a helicopter.

The work couldn’t be done by volunteers, let alone on a non-profit budget, Howard said.

The second upgrade is 17 kilometres of rerouting of the trail near Bowron Provincial Park which will partially follow a trapping trail recently rediscovered by Fraser Headwaters Alliance director Simon Zukowski and a friend when they were scouting possible reroute trajectories last summer.

“We bushwhacked up Mount Kruger and stumbled on this trail that was already there. It was beautiful. We were amazed,” said Zukowski. “It had just kind of been forgotten.”

The trail had been cut by the former area trapper-outfitter Tim Cushman, and his father, and hadn’t been used since the 1990s when natural forces destroyed parts of it.

The trapper trail will make up a good portion of the rerouting, said Zukowski, who will oversee the project this summer.

The trail currently spans about 65 kilometres from around Crescent Spur to Bowron Lake. It includes the proposed Goat River Protected Area, which the alliance wants turned into protected parkland, and is mainly used by long-distance hikers, Howard said.

“The Goat River Trail is part of the National Hiking Trail, which is supposed to be, eventually, a trail that will go all the way from the Atlantic to the Pacific,” Howard said.

In the early 2000s, the alliance’s work helped make the Goat River Trail the first leg of B.C.’s National Hiking Trail, a cross-country footpath concept still in-the-making. The intention is to build on existing historic trails used by

Indigenous people, fur traders and early explorers, and ultimately join them onto a trail across Canada, similar to the former TransCanada Trail idea (now called the Great Trail).

“The Goat River Trail wouldn’t exist if it wasn’t for Roy and all the work he’s done over the years,” said Dave King, a hiking guide with the Caledonia Ramblers Hiking Club, and an editor of the Central Interior Trail Guide.

In northern B.C., the plan is to link a series of historic trails from Bella Coola to the Rockies, connecting to the existing Great Divide Trail, which will provide a footpath through B.C., making up the province’s portion of the National Hiking Trail.

“If it wasn’t for the efforts put in by groups like the Caledonia Ramblers and the Fraser Headwaters Alliance, a lot of these trails would get probably get lost,” said King, a former wildlife biologist with the B.C. ministry of the environment. “BC Parks, and Recreation Sites and Trails have got so many trails under their jurisdiction that they just do not have the resources to look after them.”

The alliance also looks after the East Twin-Chalco Trail, east of the Goat River Trail, which will provide a path across the Robson Valley to join with the 1,100-kilometre Great Divide Trail, from Kakwa to Waterton in Alberta.

“The East Twin-Chalco Trail is mostly alpine, as opposed to the Goat which is mostly valley bottom,” said Howard. “We would tie that into the Rockies, then use the Great Divide Trail to get down as far as Banff.”

The work Howard and his group are doing is important, said Brad Vaillancourt, president of the Great Divide Trail Association. “It’s slow, slow progress, but they’re got a dream and a vision and that’s pretty cool.”