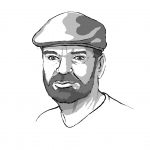 If we hope to maintain the status quo in Valemount we are going to have to start to be a lot more negative. The problem, as I see it, is more and more people are achieving flow state at the bike park and that is going to lead to big changes for a little village, creating a kind of pile-on effect that is bound to snowball and doom the status quo.

You might think that the bike park has little to offer that would challenge the status quo of such a snug community, but only if you are inattentive. Critics of the park underestimate its impact at their own peril.

Just a few short years ago, you could safely discharge a cannon ball down 5th Avenue any time after 5 pm on Friday night, and most of the day Saturday. But now people are gathering after their mountain bike adventures. High as kites on a cocktail of natural stimulants after having achieved what psychologists call ‘flow state.’ Dopamine increases attention, information flow, and pattern recognition. Norepinephrine triggers a glucose response so bikers have more energy; increased arousal, attention, neural efficiency, and emotional control.Endorphins relieve pain and induce pleasure. Similar to opioids but 100 times more powerful than morphine. Anandamide feels similar to the psychoactive effect found in marijuana and is released in exercise-induced flow states and elevates mood, relieves pain, dilates blood vessels, and aids in respiration and worst of all it amplifies lateral thinking – the ability to link disparate ideas. Serotonin fills the brain with an “after-glow” effect, leaving bikers with a post-exercise feeling of bliss.

Alas, it leaves Valemount chock full of addled, problem-solving, hyperattentive, happy, blissful lateral thinkers. You may also note riders are often overwhelmed with a feeling of gratitude for the well-kept trails, causing them to consider giving back to the community.

When people come here and have an overwhelmingly positive experience in the community, they want to become a part of it. They bring their enthusiasm, skills, money and resources. In short, change.

Flow state problems
The problem with the bike park is that riders of all levels are able to achieve flow state, challenging themselves according to their skill by modulating their speed and choosing to go over (or avoid) various obstacles and jumps.

The result is that in a crew of 10 riders, it is more than likely that 8 or 9 will have entered flow state by the end of the day. Those that don’t directly achieve flow state can get there because of a little studied phenomenon called a ‘contact high.’

Ski touring is a wintertime equivalent, combining physical exertion with a fast-paced descent, resulting in the same high. While not that many people ski tour in the vicinity, it is a threat to watch.

What can we do to maintain the status quo against these positive forces conjured by the flow state and resulting cocktail of natural highs?

We must be more negative. Triply so. It’s the status quo’s only defense.