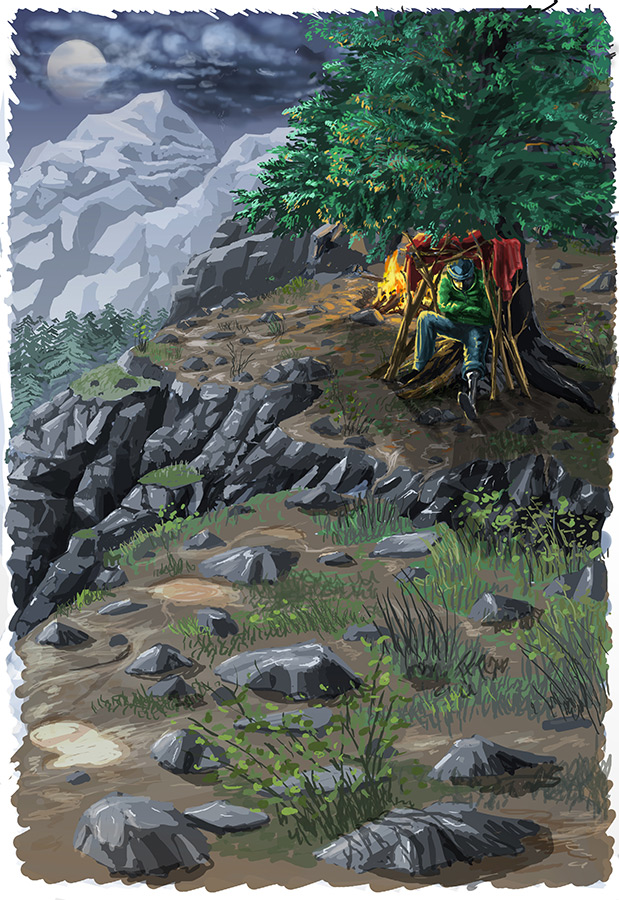 Cool rain was forecast. Feeling strong, I decided to push to finish flagging my trail to the alpine. I had my day bag. This used to include a tent fly and some parachute cord for emergency shelter building. It used to have a water filter, bear spray, and other modern implements. I’d become complacent.
I had just broken out of the sub-alpine. I should have felt elated that I’d reached my goal. Instead, my outer right thigh tendon’s connective tissue suddenly became severely inflamed. It was shockingly painful and in my strong leg. I struggled to climb or descend, turning to my left, awkwardly walking sideways, minimizing bending my leg.

I hadn’t told anybody where I was. There wasn’t any cell service. I was quite low on liquids.

Dense forest and blowdown had forced me to retrace many steps to make a better ribbon line. The extra balancing must have been too much. Plenty had been drunk but also sweated. What to do? Going down that rat’s nest was not happening before dark. In the morning? I couldn’t imagine it the way my leg was feeling.

I felt my first micro-panic right at the start. I knew I was strong enough, though. A night or two on the mountain, I could handle. A poor decision or panic now could avalanche into something worse. Keeping my wits was my most important survival skill.

There was water over the peak. Hobbled as I was, I decided it was in my interest. I reached the snowfield within the hour. The water, after all the rain, was undrinkable with suspended clay. Downstream I dug a hole to see if it would clear.

In the sediment: wolf tracks. But no wolf-like movements around. I wanted to rest and massage my leg. Twenty minutes. No luck with the water settling. I filled my bottles hoping they’d settle overnight.

I knew the trail to be much better than my dense forest line. One of my first decisions was to head to an area of dead pine below the alpine. There are some difficult areas accessing the main trailhead, particularly with both light and leg failing.

I fished for my headlamp. It wasn’t where it should be. Then, I’d remembered I’d used it a few days before. More micro panics. Fortunately, I had navigated this area and knew my options. Recent trail work in the immature subalpine had re-routed ribboning, confusing me in the low light. Micro-panic resolved, I had this. The trail crew had done an excellent job. I found the top of the main trail.

Entering the steep rocky trail top, and with sunset colours faded towards McBride, I scolded myself again for not ensuring possession of my headlamp. With failing leg, the challenge was met with stubborn resolve.

I got to the camp location, night vision adjusted enough to barely distinguish trees from ground. I gathered a large wad of black lichen, and knifed into some wood, so it would catch once the lichen material flamed.

I keep my lighters dry inside screw-top pill bottles with child safety metal strips removed. Not doing so could be a fatal error with numb fingers. Another bottle had birch bark, half of which I placed where I lit the lichen ball.

Donning leather gloves, I found small firewood, and then larger stuff, building it vertically. With firelight expanded, I could locate more wood. With folding handsaw, I cut large dead branches just enough to break with body weight. To ensure enough wood if the weather worsened, I spent an hour dragging more to the fireside.

I limbed a spruce to shelter under its branches, stuffing the remaining ones with live-cut limbs. I could use my rain jacket on top to shed water from hard rain.

The activity warmed me, but I knew this wouldn’t last, particularly on a cold rainy day at this elevation. I donned energy-conserving layers.

While I tended fire, I dried more lichen in case I needed to camp on the way down. My body found its heat balance. I removed layers. I removed my right shoe and left prosthetic leg, relaxing. It only rained lightly, always warned by wind.

I was nearly asleep at one point. The fire had died to glowing coals, and the clouds were dense, threatening rain. In the distant South East, some moonlight filtered. I heard something large walking around me. I put my back to the tree and reached to locate my knife. I built the fire, illuminating a small area. With my eyes adjusted to the brightness, I could actually see less into the forest. I was hoping for reflected eyes. Was it a cougar, or that wolf, or maybe a bear? By the weighty footfalls, my guess was moose. I called out to it, but it did not make itself known. Bear spray was also missing from the bag.

When daylight began I crushed my coals and poured some of my grey coloured water on it. The water had not settled out much. Not wanting a gut ache, I had only sipped a bit in the night. I geared up and tested my leg. After massaging it a number of times, I had high hopes. The leg bothered me within 5 minutes.

I continued my sideways limp, taking many breaks, and made it down the mountain before noon.

On the flats, the leg was bothered less. My amputated stump was quite tired from compensating for the ‘strong’ leg. I walked to some nearby friends’ place, hoping for a ride. They weren’t home. I used their garden tap to drink and then left. The 3km walk home was long because I’d spent my energy, hadn’t slept and was still dehydrated.

At home, I dropped my gear, drank some water, stripped, and climbed into bed, rubbed arnica ointment on the stressed tissue and took some ibuprofen.

Feeling dry, warm, lucky, and very grateful, I had a good solid nap with a lot of lessons learned.