Graduates from the Valemount Elementary School Grade 7 class enjoy a unique rite of passage. For five days at the end of the school year, the class hikes the iconic Berg Lake trail in Mount Robson Provincial Park. The hike to Robson Pass and back is 46 kilometres roundtrip, and takes students along the raging Robson River to its headwaters and Berg Lake, where icebergs calve off the glacier into the turquoise blue water.

The trip has been running for over 40 years, started around 1975 by Gail Tuggle. Karen Doughty is the current teacher in charge of the excursion and has been involved for over 20 years. Over the lifetime of the expedition many traditions have survived, notably the making of homemade ice cream with an old hand-churn stored at the ranger cabin and ice from the glacier.

This year 12 students made the trek, spending two days each to hike up and down, and one day to explore around Berg Lake and Robson Pass at the top. Students said the hike was filled with memorable experiences and challenges, and was a time to bond before making the move to high school next year.

“I think the most memorable part of the trip was hanging out with friends and racing ‘boats’ down the creek at Robson Pass,” said Aron Michaud. This was his first time up to Berg Lake, as well as for his father who joined the group as a parent volunteer.

Adalie Anthony also enjoyed the bonding experience with her friends. 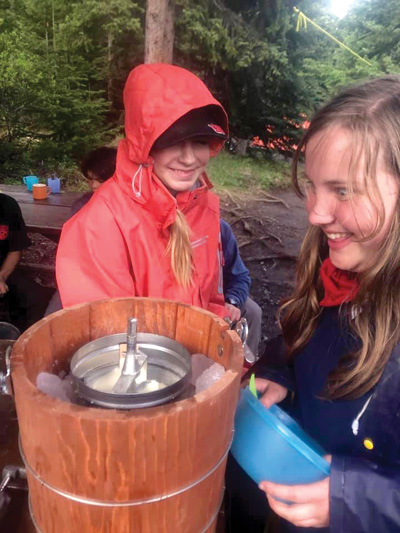 “The most memorable part of the trip was when many of us told stories,” she said.

Both Anthony’s mom and dad participated in the trip twenty-something years ago. Since the field trip has been running for so many years, many of the students’ parents have also participated in this graduation tradition.

The weather in June is often unpredictable, and this year the group experienced some stormy mountain weather. Aaron Rothwell’s highlight was the thunder and lightning storms that hit the night they stayed at Robson Pass. Crashing thunder echoing

off the peaks while the group huddled under tarps or in their tents was a unique experience.

The storms made the hike back down to Whitehorn the next day a challenge too.

“It was really muddy and slippery and I think we all fell at least once,” said Madelyn Shaw.

While the stormy weather provided some excitement and a challenge, the students were still able to take in and enjoy the spectacular scenery.

“It’s so amazing up there” said Maddisyn Smith. She loved the spectacular mountain views, and spending time with her classmates in the mountains. Tobi Gee echoes that sentiment and said her favorite part of the trip was “definitely waking up to the beautiful mountain scenery.”

It was certainly an experience to remember, and one in common with over 40 years of Valemount Elementary School grads. Students will now go forward into the next stage of their school life with this accomplishment behind them. The new connections made with their classmates, community and mountain environment will hopefully serve them well in the next phase of life.