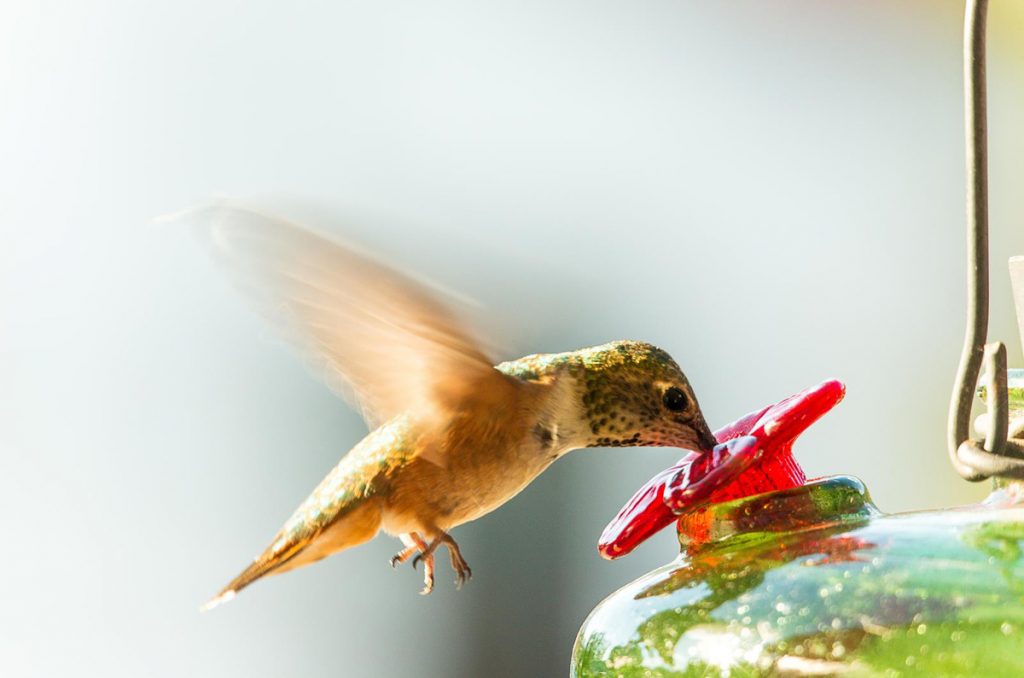 Curtis Culp is a longtime hummingbird enthusiast and research contributor through his banding work in the Robson Valley, but he hadn’t considered publishing his knowledge until recently. He credits former McBride mayor, Loranne Martin, for getting it started when she approached him about writing a book. After working on it on and off for about a year, 600 copies of the booklet The Hummingbirds of the Robson Valley are available at local retailers in exchange for a donation to support hummingbird habitat in the area.

Culp is a certified hummingbird bander and for about 10 years he caught and banded birds from his home in Dunster and contributed research on these birds. He learned a lot about their ecology, migration patterns and behaviour. He details much of this information in his booklet, as well as specific information to the area not readily available elsewhere.

Rufous hummingbirds are the most common species in the Robson Valley, although not the only one. According to Culp, these fascinating and entertaining animals weigh only a little more than a penny, and have many interesting habits. The first birds to arrive are territorial males, followed by a larger wave including the females. Later in the season the population booms, with the season’s offspring showing up at feeders too.

While Culp is the author and expert behind the booklet, the project has many contributors and funders. The two major funders are the Robson Valley Arts and Culture Council and McBride Community Foundation. Because the publication is paid for through grant funding, proceeds from sales are going back into the community in the form of plants and habitat to support hummingbirds.

Abi Ward, the McBride and District Public Library Director, helped with editing and providing pre-press support. Culp also credits his daughter, Kerry Hall, with providing much of the initial editing and support to get the booklet together.

“My daughter Kerry helped with edits,” said Culp. “And she cut out a lot of my humor,” he adds with a chuckle.

The initial response to the booklet has been very positive.

“We expected donations to be small but the people of the Robson Valley are amazing and the support has been phenomenal,” said Sheilah Foster, on behalf of the Robson Valley Arts and Culture Council. “We quickly realized that this little booklet, written with love, had wings and that there was an opportunity to create something inspirational.”

In consultation with Curtis Culp, organizers decided to use the donated funds to purchase lilacs and donate them to help feed the hummingbirds.

“They can continue to provide delight and inspiration for the residents of our community,” Foster said.

While hummingbirds feed on many types of flowers and have a preference for bell shaped flowers, lilacs thrive and bloom for decades, so can act as a visible and long-lasting legacy and food source.

These lilacs with plaques are available through the Whistle Stop Gallery at no cost to businesses and organizations in McBride and Dunster. Plaques read “This lilac was planted to feed hummingbirds in honour of hummingbird enthusiast Curtis Culp and his booklet ‘Hummingbirds of the Robson Valley.’”

The Garden of Memories at the McBride District Hospital was the first location to receive a lilac and plaque. Other plants that provide food and habitat for hummingbirds were also planted in that garden, donated by Pete Amyoony.

Booklets are available by donation at the Dunster General Store, Home Hardware and Home Essentials in McBride and at the Whistle Stop Gallery.