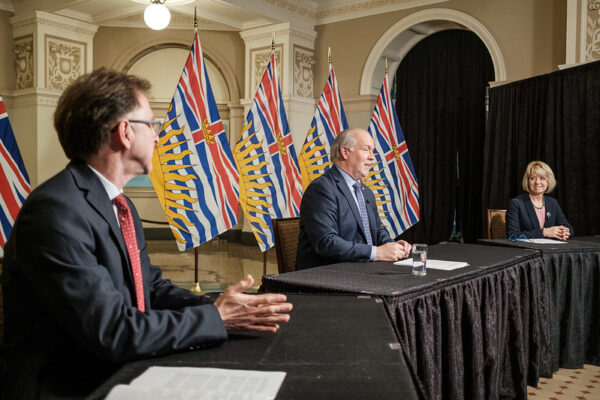 First published by the Tyee

“This is not a return to normal,” said B.C. Premier John Horgan May 6th. “We’re going to the new normal.”

What will be different after weeks of tight measures to limit the spread of the coronavirus? Much depends on recent reports of case numbers and hospitalizations remaining low. If they do, closed businesses could reopen and small social gatherings could be allowed as soon as the long weekend beginning May 16. Most provincial parks will reopen, starting May 14, for day-use only. On June 1, many remaining facilities, including campgrounds, will reopen. A small number of parks that attract large crowds, or where reopening would pose a health risk to nearby communities, will remain closed.

But larger gatherings in venues such as concerts, bars, nightclubs and casinos won’t be allowed until a vaccine or treatment is available.

The target date for the start of Phase 3, which will include opening up of additional businesses and services, is between June and September 2020, if transmission rates remain low or in decline.

Phase 4 will only be achieved when the threat of COVID-19 has been significantly diminished through widespread vaccination, broad successful treatments, evidence of community immunity, or the equivalent.

Households will also be able to “expand their bubbles” with small social gatherings and distanced visits among extended family and small groups of friends.
“The key is only small gatherings,” said Henry.

The plan will approximately double interactions among people from about 30 per cent of normal to 60 per cent with the goal of balancing the physical and mental health, social and economic needs of the province with the need to keep transmission of COVID-19 as low as possible.

“It won’t be the flipping of a switch,” said Horgan. “We need to ensure we progress together, slowly and carefully.”

Phase 2, which will begin mid-May, includes:

People will need to continue physical distancing, not going out or to work when at all sick, increase cleaning in common areas and using physical barriers to ensure connections — while nearly doubling under this plan — remain as safe as possible when at work or socializing.

B.C. required relatively few sectors to fully shut down compared to some provinces, instead opting for workplaces to come up with ways to operate safely, meaning the province is already in Phase 1 of the plan. “B.C. has been charting its own course from the beginning,” said Horgan. “And that’s why we are where we are today.”

For the second phase that could begin as early as mid-May, the Province has put restoring elective and scheduled surgeries and other health services like dental work, counselling and physiotherapy at the top of its list.

Provincial parks could also reopen for day use by the long weekend, but Horgan advised that non-essential travel far from home or to other communities is still discouraged.

Retail, personal care and salons, restaurants and childcare are also priorities to reopen or expand services in the coming month, with enhanced screening for clients and staff who are sick.

The Province will be working with industry associations to come up with sector-specific safe operating guidelines that businesses and organizations must use to create protocols specific for their work sites.

Precautions could mean using scheduling to space out customers, plastic barriers where applicable, and expanding hours to reduce the density of customers in the store at once.

Staggered shifts, more online shopping options, and ensuring there are clear policies to prevent employees from coming to work while at all sick are also expected to be rolled out.

These protocols must be made public and are subject to inspection and review by WorkSafeBC.

Henry expects to see more in-class K to 12 instruction before June in the third phase, and for school and post-secondary education to return in September with a mix of online and in-person learning.

Broader reopening of provincial parks for overnight camping, hotels and resorts, domestic film production and entertainment like movie theatres and symphonies will happen over the summer but not until June at the earliest.

Settings like casinos, nightclubs and bars, as well as large concerts and conventions, pose greater challenges to reopening and have no timeline for resuming in the plan’s fourth phase, which would not be triggered until there is a vaccine or treatment for COVID-19.

The 50-person limit on social gatherings also remains in effect for the foreseeable future.

Henry and Horgan said the province will be proceeding with caution at each phase, monitoring progress in periods of two to four weeks and potentially reinstating some restrictions if a surge in cases is detected.

The goal is to find a socially and economically sustainable course for the coming months that keeps transmission as low as possible.

“We’ll be monitoring things very carefully,” said Horgan, noting that if customers don’t feel safe accessing businesses, the plan won’t have been a success.
“We need to make sure consumers, people, are comfortable that we are doing everything we can to protect each other.”

Henry and Horgan both urged individuals, particularly those at heightened risk for serious infection, to do only what feels comfortable for them as options for social interactions increase.

“We’re asking everyone to follow these principles and use your common sense,” said Horgan.