Up on a steep hillside above the Raush River, more than a day’s trek by any means other than a riverboat or helicopter, lie strange remnants of the world’s first intercontinental attack: the corroded remains of a Second World War Japanese balloon bomb, known as a ‘Fu-Go’ or fire balloon.

Bowdrie Widdell wasn’t looking for a bomb. He was hunting for mountain goats with a small crew and they accessed the Raush River via riverboat, as it’s no small feat to get back there. It’s an hour’s ride up from the mouth of the Raush, and includes navigating through steep sections.

After about an hour and a half of steep hiking, Bowdrie happened upon the strangest thing. A spring valve. Later he’d learn that this sat at the bottom of the balloon to release hydrogen when the balloon went too high in the atmosphere.

At this point he hollered to his companions to come and look and before long they found the chassis and ‘brain’ centre of what they would later learn was an intercontinental bomb dropper.

Widdell said he had no idea what it was. His first thought that it may have been a burner for a still.

“But this was a really horrible place for a still,” he said, laughing.

The wreck of the Fu-Go sits in an old burn. Widdell said it’s tough to know whether the device had caused the fire or not, but he leaves open the possibility.

That’s one of the things the device was supposed to do: start forest fires that would divert American forces from the war effort.

Widdell had hoped to recover the relic and have it brought to the Dunster Museum.

There is ample documentation of the balloon bombs now, but during the war the attacks were kept under wraps. The Allies didn’t want the Japanese Imperial Army to know whether or not their incendiary balloons were working. Except for a few unlucky incidents, they did not work and the media blackout as well as aerial attacks on hydrogen creation facilities eventually shut down the program.

According to Robert C. Mikesh, who wrote a 1973 book on the subject, the Fu-Go was designed as a cheap weapon that would use the jet stream to drop bombs on American cities, forests and farmland. 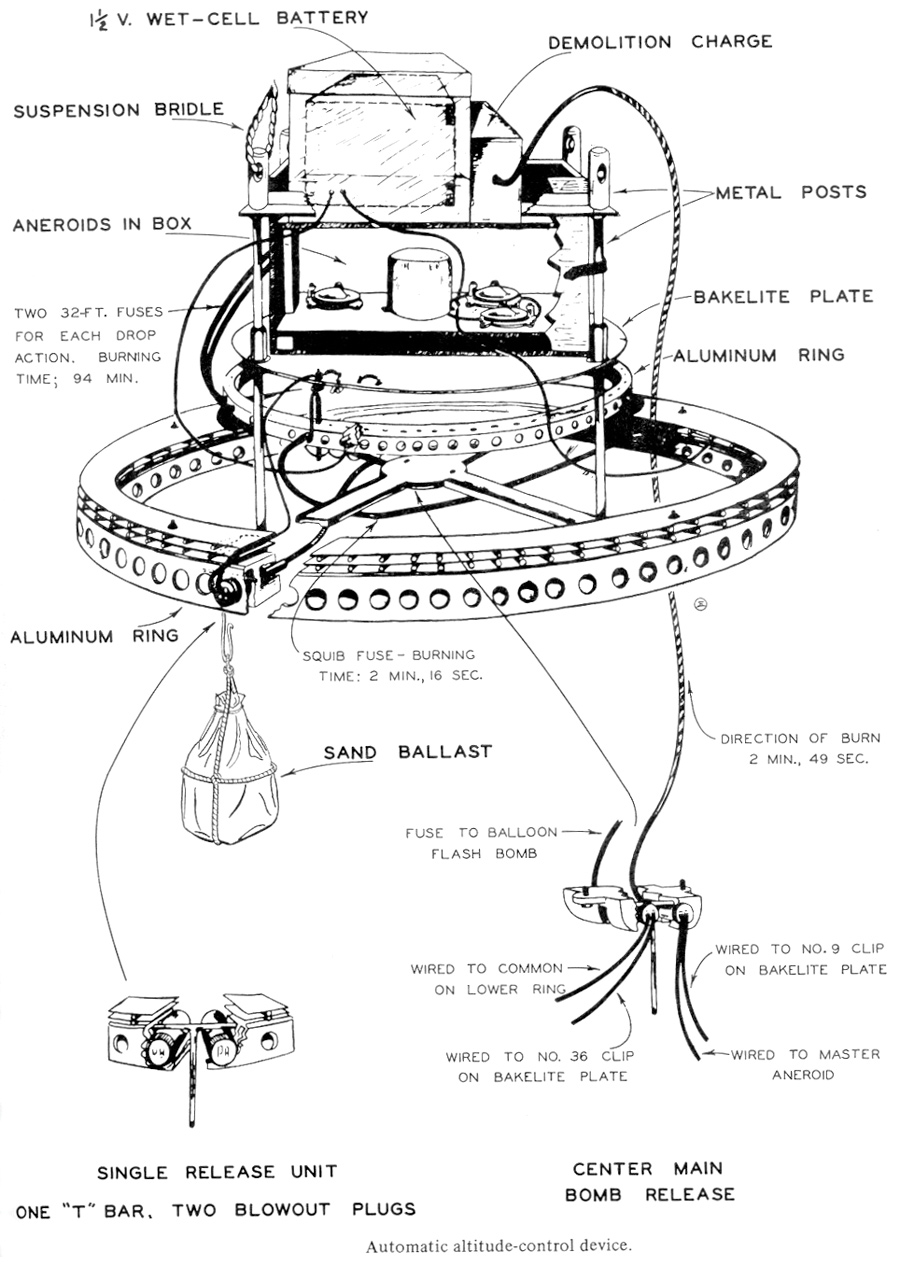 The jet stream, a band of fast moving air at about 31,000ft or 9100 metres above sea level would take an unpowered balloon from Japan to North America in three days.

Exactly where those balloons would end up was a mystery. To everyone. The balloon bombs weren’t capable of navigation as they would go where the jet stream pushed them. They made do with an ingenious system that kept the balloons in the jet stream, venting hydrogen if they flew above 38,000 ft or alternatively dropping sandbags via an explosive charge if they flew below 30,000 ft. The payload of the balloon was remarkable: about 1000 pounds or 454 kg. The balloons were four metres in diameter.

After three days in the air a final flash discharged the bomb and lit a long fuse that hung from the balloon’s equator, destroying it.

Widdell would like to see this piece of history saved, but it has been reported to the authorities and will likely be disposed. Some of the incendiary devices are still attached to the frame though partially buried. Attempting to recover the device would be risky.

It’s estimated that the Japanese Imperial Army unleashed more than 9000 of these balloons into the jet stream above Japan, and they expected about a 10% success rate. Only about 300 have been accounted for.

In all, the balloons are thought to have only killed six people in North American. On May 5, 1945 a Sunday school teacher and five teens found what must have been the same device in Southern Oregon that Widdell found up the Raush. They called someone over to see what they found when an attached bomb exploded killing all six.

Of interest though is that one balloon actually cut power to ‘Hanford Site’ a nuclear production complex in Washington State on March 10, 1945. The balloon caused a short circuit in the power lines to the nuclear reactor’s cooling pumps which could have triggered a meltdown. This is the same site that provided the material used in the nuclear bombs that would end World War II. Lucky for the Americans, the power was quickly restored. Six months later the Americans bombed Hiroshima and Nagasaki.

Widdell had no idea about Fu-Go bombs before he came across the wreckage.

Another Fu-Go bomb was recovered by a forestry crew near Lumby BC in 2014. It was blown up on site.