Glacier melt is exposing an unpleasant piece of history. Those of you that lived through the 50s and 60s may have expected this would come back to haunt you. I did not.

I was shocked to learn that nuclear fallout, trapped in local glaciers for decades, is now being released into the ground nearby. Dr. Philip Owens’ research concerning the contamination of a local glacier late last week is disturbing to say the least. The snout of Castle Creek Glacier in McBride is so contaminated that you can’t find ground that is more sullied without going to places like Chernobyl or Fukushima, the sites of terrible nuclear power disasters. 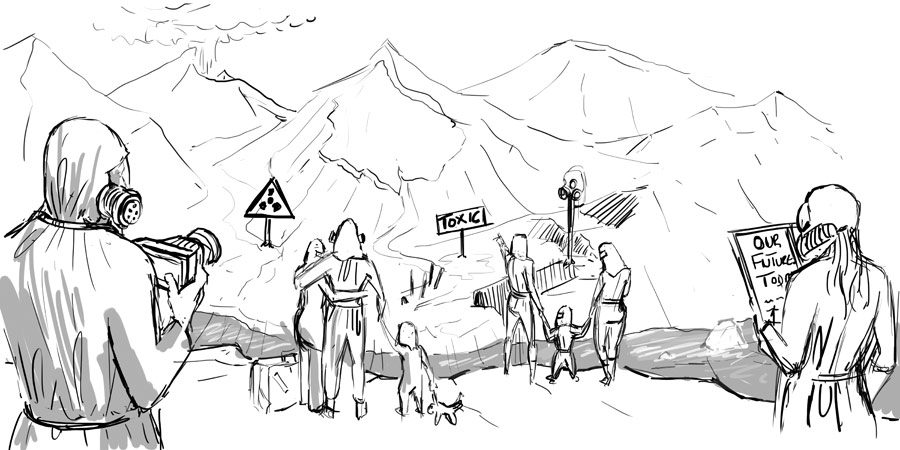 The airborne nuclear fallout from early atom bombs and tests has been stored in our glaciers, and it is slowly being exposed and released.

Only Castle Creek Glacier was measured, but there is little doubt that all of our glaciers bear the same burden.

This challenges the idea of a glacier as a holder of something pure.

What does this teach us? I’m asking…

I guess we should be happy that three nations signed the Limited Test Ban Treaty that banned nuclear weapons testing in the atmosphere (and in space and under water) in 1963. It’s a sign that even enemies can join forces to prevent a common evil if the danger is close enough.

I guess we should be sad because we can see how the impact of human activity has sullied even the most remote and sacred places.

For me, part of my love of being in the mountains is the magic of being so far removed from the rest of civilization and the mess we have created out there.

We sit pretty here. We’re wrapped around the sides by forest, surrounded by protective mountains there is a feeling that nothing can touch us, no tsunami can hurt us, no earthquake can shake us and that the air will be pure and clean until the end of time and the mighty glaciers beyond these hills will keep us watered and fed.

It’s a great image, but is it true?